A bubblegum bubble glazed with blood. Death by meat tenderizer spanks. A zombie, in a tall glass, with four shots of tequila. Comedy, gore, and exploitation congeal into a sizeable lump of grease in the godfather of gore’s aptly titled: The Gore Gore Girls.

It’s always refreshing when a movie lets you know from the get-go what it’s all about. The Gore Gore girls kicks off with exotic dancer, Suzie Creampuff, having her face repeatedly slammed into a mirror, paddle-ball style, leaving behind a face that hardly resembles anything human.  Cut to manic jazz playing over the opening credits in all of their psychedelic gory–er… glory. Wake up the kids and strap in for wholesome fun!
Whodunnit? And who continues killing the go-go girls? The oily, cane-wielding private eye Abraham Gentry is on the case when alluring reporter Nancy Weston greases his palms on behalf of the paper, in exchange for an exclusive.
Now, Gentry is a man you’d want to slap just as soon as high-five in this blatantly misogynistic film (the misogyny likely being a product of the times). He’s a real narcissistic jerk who loves talking into the camera, and who intentionally gets Nancy drunk not once, but twice and uses her as bait. On the flip-side of that token, however, is the fact that he never takes advantage of any of the girls sexually– a feat that would have bore no challenge for Gentry. He’s a smart goose, a real ripe tomata, with wit by the barrel. And he’s too good for us.
The Gore Gore Girls is littered with so much strange paraphernalia that listing it all is an arduous task. Notably, naked girls don’t dance so much as jerk and wiggle like background extras over looping surf tones and marching band music. Of course women are horribly disfigured in a multitude of ways. In one scene we see a stripper by the name of Candy Cane really feeling herself in a mirror. No, like literally rubbing on her breasts and blowing big bubblegum bubbles in a mirror before getting stabbed and then having her face mutilated. In another, a woman dies after having her ass repeatedly beat by a wooden meat tenderizer. The logic is delightfully flawed, and I wish more film characters would die by getting struck in the butt.  Then there’s Grout the melon smasher: A man who draws faces on melons with lipstick before smashing them on the bar. Later, a small glass of acid to be used by the killer is distinctly labeled “Acid” and below that “Made in Poland,” and if that doesn’t sell you, I don’t know what will.
The reveal of the killer is one of the most ludicrous explanations I have ever heard and only adds to the charm of this offbeat *ahem* blood feast.
(I would like to take a moment to thank Arrow Video personally for releasing the most incredible set of Herschell Gordon Lewis films that exists in the ultimate best box set released in all of 2016 – pictured below – allowing me to view many of these tricky to find releases.) 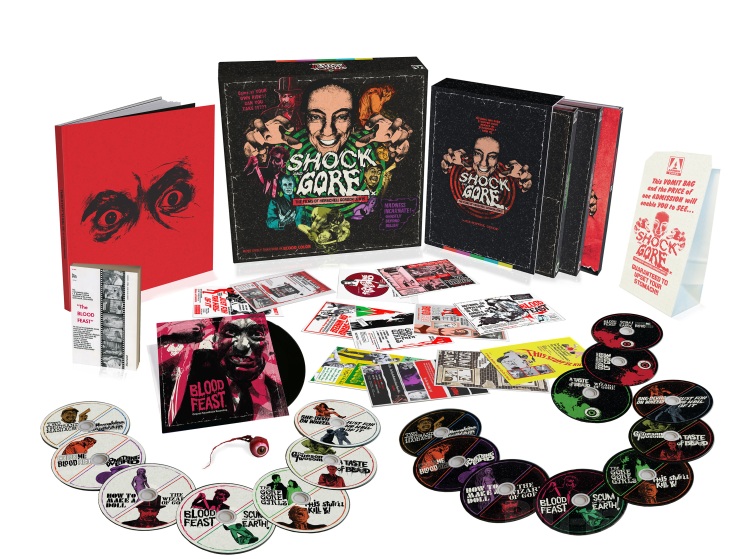 Remarkably charming despite its flaws, I enjoyed this entry into the HG Lewis catalog more than any other I have seen thus far. I give The Gore Gore Girls an unctuous–
8/10.