It’s DOUBLE D Day at The Basement on a Hill!  That’s right – double your pleasure, double your fun with the second of 2 blogs this week from yours truly! This time I’ll be bloggin’ about Quija boards.

For the young’uns out there, Tawny Kitaen is LEGEND.  She did a little music video aftet Witchboard for the 80s hair band Whitesnake. The song? Here I Go Again.

Full disclosure: Witchboard has been a guilty pleasure of mine since it debuted on the silver screen in 1986. While a sandwich is a sandwich but a Manwich is a meal (just roll with it), so too are Quija boards and middle school parties.  Okay, maybe not.

Perhaps it was my Catholic school upbringing, but I always found playing with a Quija board late at night at a slumber party daring.  Much more scary than the old chestnut “Light as a feather, stiff as a board” game.

A bunch of friends of mine and I once played around with a Quija board. We did get it to move, although I always suspected it was one of my friends goofing around and pushing it. I’m sure we asked it all sorts of insightful questions, like “is so-and-so going to ask out so-and-so” and “when is s0-and-so going to lose her virginity” and so on.

Having experienced a Quija board first hand, and hearing all the spooky rumors about how it was a portal to be opened for Satan, and that you shouldn’t play it alone, etc., naturally when I saw the trailer for Witchboard I knew I had to see the movie.

The setup is not as as convoluted as I am about to make it: man and woman host party; man’s former friend (and woman’s former boyfriend) shows up to party with his Quija board (hey, not as far fetched as it sounds); woman and former boyfriend make a “connection” with the spirit of a little dead boy through the Quija board, but woman’s current boyfriend makes the spirit angry, and he departs in a huff. The next day the woman’s former boyfriend calls saying he forgot his Quija board and wants to pick it up as he has some friends who want to use it over the weekend (completely legit). Meanwhile, the current boyfriend is working at his day job when one of his best friends is killed in a freak accident. The deaths start piling up. The police get involved, and suspect the woman’s boyfriend. The woman continues her communications with spirits through the Quija board (don’t play it alone, damn it!) and slowly – SPOILER ALERT – becomes a portal for a very nasty demon. 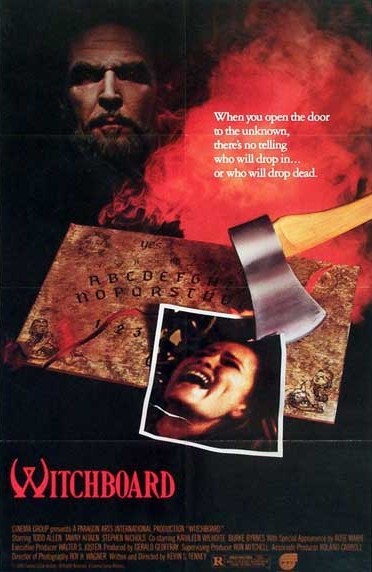 While it may not be your cup of tea, and the acting is a bit melodramatic at times (okay, a LOT of times) I can think of worse ways to kill a couple of hours on a Saturday afternoon. Give it a shot… if you dare.