It’s that time again. It’s the weekend! I urge you to dedicate at least one of these nights to yourself. Or do what my mom did this weekend: take a four-day weekend. Hell, dedicate the whole damn weekend to yourself. You work hard. Whether it’s work, friends, family, or moonlighting as Batman, put that stuff to the side this weekend and watch a couple movies.
For this week’s double feature I changed it up a bit. Usually I’ll pair a recent movie with an older movie. This one, though, pairs two fairly recent movies together. We talked low-budget indie films this week on the show and Rob mentioned The Invitation. My first thought was to pair that with Sunset Boulevard (both set in L.A.), but I didn’t think that would fly with this crowd. So I went the complete opposite of low-budget indie for the second movie.

I suppose you could call The Invitation a slow burn, but it’s just so uncomfortable right from the beginning. I went in having only seen one trailer one time, but I was still shocked. It’s one of those that leads you in one direction, but then you say to yourself, “No, it’s too easy,” but then at the end you realize the simplest and easiest way is sometimes the best (and only) way. Speaking of the ending, prepare to be jarred. I felt a pain in the pit of my stomach during the final shot, leaving me with a eerie feeling for the rest of the evening. That eerie feeling will be perfect to lead you into our second movie. 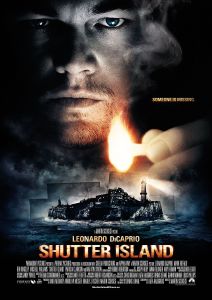 From a $1 million indie film to an $80 million studio film. What better way to cap your night off than with a movie centered around a hospital for he criminally insane? Say what you want about Leo, but I love him. He’s mixed in with a HUGE cast here, too. This is another one where you think you have it figured out, and then you’re thrown off, and then you’re back to your original idea. This just proves Scorsese can master any genre.

Is this real life? Head to bed tonight with the thought that not everything is as it seems.