GET OUT, White Feminists!

Now, if you’ve taken a peak at my avatar, I can only imagine what you’re thinking, “But… she is white.”  You bet your ass I am.  Descended from the UK and Ireland, I am an always-carrying-sunscreen, never-used-a-seasoning-or-spice, should-not-dance-in-public kind of white.  Which makes me woefully unqualified to take an in-depth look at Jordan Peele’s phenomenon Get Out.  This psychological thriller is an hour and forty-four minutes of systemic-racism-exposed that demands and deserves that my white self take a back seat and listen for a change.

What it is my duty as a white woman to talk about, is Rose.  Gloria Steinem, renowned feminist, recently confronted the idea of White Feminism by saying, “It either includes all women, or it’s not feminism.”  While I think the full text can be seen as a little dismissive of concerns, she makes a powerful period statement.  Feminism either includes all women (black, brown, trans, queer, disabled, of any nation, of any faith) or it isn’t feminism: PERIOD.

It sounds like a simple concept, yet historically, white women have chosen their racial privilege over their solidarity as female.  In 1920, we are told, women got the right to vote.  What we fail to acknowledge time and time again is that black women were unable to freely exercise their right to vote until the 1960s: 40 years later.  The National American Woman Suffrage Association found that, in a time of severe racism, they would receive more support if they excluded black women.  They went on to include education as a requirement; knowing black women were denied access to education, and they became largely ineligible.  (Check out this book to learn more.)  Did all white suffragists hate black people?  Unlikely.  But, in choosing to exercise the privilege of their skin to uplift white women while disenfranchising all other women, they all participated in racism and White Feminism.

I won’t go into detail about Get Out, less for the sake of spoilers and more because I think it’s vital that every person see it for themselves.  However, the character of Rose (the white girlfriend) is what I would point to each time a white woman gets defensive about her participation in racism.  Before you invoke unity or condemn in-fighting, take a hard look at what Women of Color are up against.  Rose is what happens when you take the anxieties of WOC and play them out to the end.  At best, we’re well meaning women with blind spots but at worst, we’re insidious with our racism and safe behind our skin: we’re dangerous. 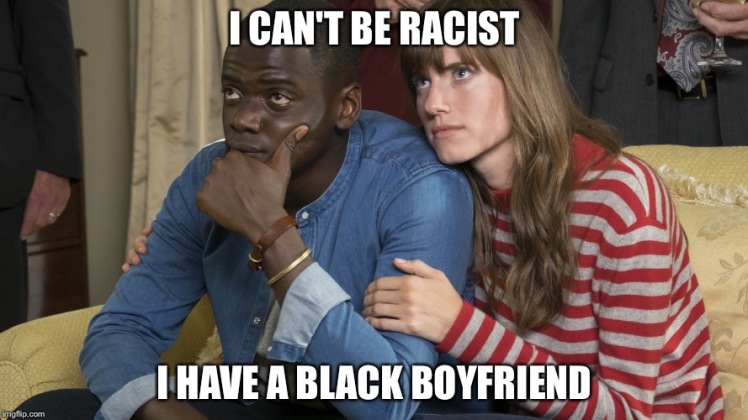 Rose is the every day White Feminist: calling attention to each instance of racism (privately) to her boyfriend but never removing them from the situation, stepping in with a police officer without ever acknowledging why she’s safe to do so, using her dad’s education (he’s a neuro-surgeon!) to outweigh Chris’s lived experience.  Rose is each of our tendency’s to intellectualize but never mobilize; she’s the incarnation of us choosing the luxury of our whiteness over the discomfort of true solidarity.

Go see Get Out.  It’s a horror fan’s dream, it’s brilliantly written and exceptionally acted, and it is crucial that we put our money where our injustice is.