Is it scary?  If you’re looking for a nail-biter, skip Out of the Dark. While everyone loves hoards of creepy children in bandages, it’s hardly new; especially when it revolves around the trope of child-in-constant-peril.  Consider this a spin-off of Trey’s Let Me Watch That For You, because from a horror perspective… You’d be better off watching the news for a good scare.  As luck would have it, however, it makes for an incredible feminist/activist conversation starter.

Oh God, now what?  Hold off on the eye-rolls, children, this one isn’t about gender (you’re safe this time, dudes).  Out of the Dark is a classic, thrilling tale of Westernization and Colonization!  Stick with me.  In the film, an American, white mom-dad-and-child move from their home in London to a small village in Colombia called Santa Clara, where mom (Julia Stiles) will be taking over her father’s factory.  The South American village is depicted as impoverished and rough while the white family and their factory (Harriman Group) are clean and affluent.  The town is holding it’s annual festival honoring a massacre in which Conquistadors kidnapped their children, locked them in a temple, and set it on fire.  The superstitious believe that the the ghosts of the burned children haunt them.  We come to learn [spoiler alert] that the apparitions of bandaged children are the result of the brutal mercury poisoning of nine children by the white family’s factory.

When real life is scarier than the movies.  While I found the movie exceptionally boring, it’s message was abundantly clear.  Upon further investigation I discovered that its intentions were explicit from the start.  The Spanish-Colombian co-production was entirely funded by a company called Participant Media which has produced films like: An Inconvenient Truth, Fast Food Nation, Waiting for Superman, and the award-winning Spotlight.  Participant is self-described as being the “leading media company dedicated to entertainment that inspires and compels social change.”  Once placed in the context of its creators and its movie siblings, Out of the Dark begins to make perfect sense.  It’s an allegory for the colonizers (the U.S. or the conquistadors of Spain and Portugal) that sweep into what they believe to be underdeveloped countries and use them for economic gain under the guise of bringing jobs and civilization.  The father and owner of the factory in the film even says, “I came to this jungle and civilized it,” while referring to the children he poisoned with mercury as “collateral damage.”

The real horror is that this film isn’t fiction; not really.  The United States has a long record of outsourcing production to countries where labor is cheap and environmental regulations are weak.  We say we’re bringing jobs but what we’re really bringing is the pollution we know to be too dangerous to have in our own backyard.  Each year, about a half a billion tons of U.S. coal gets shipped overseas for other countries to burn.  We are knowingly making profits off of an industry that will make people sick.  As we speak, the new administration is attempting to gut the EPA and has already reversed an environmental regulation that protected water sources from toxic waste.  In Canada, colonial industrialization has poisoned Native waters with mercury for decades.

Out of the Dark may not be the thriller we were jonesing for but it fit a troubling truth into a neat 92 minutes.  In the end, isn’t that what art is meant to be about?  While distraction can be good and even necessary, art’s power lies in its ability to shine a light on injustice and hold a mirror up to our own sins.  Are our priorities grounded in morality and compassion or have they veered off the path toward greed?  And what will that cost us in the end? 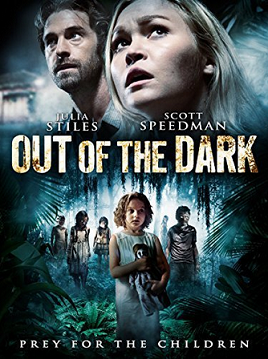