AKA Violent Shit 3: Infantry of Doom

I spent the majority of this last week moving furniture, so my movie viewing and reviewing time was skint, but I won’t leave you sickos with dry tongues. Saturate them with violent shit…

The Violent Shit series is one that lacks continuity in the form of an ongoing story. For this reason you can watch any of them individually and have just as good an idea about what is happening. That being said, you will still probably have no idea what’s happening, but you’ll know it’s fun.

The imdb synopsis for Zombie Doom reads: “Karl the butcher continues his violence on an isolated island, but this time he has his followers.” Yeah, that about covers it. There are three dudes that get stranded on this island and it kinda ends up being them vs the butchers in a Most Dangerous Game sort of situation, at least until ninjas arrive. Yes, ninjas. Then we get ultra slow kung-fu and kicking clean through people!

Oh, and yes there are zombies. Zombies that are being created by a scientist who looks like Hitler and wants to create the perfect race of beings. I’m not sure why, but I’m not going to moan about it.

If you like the progression that occurs in the Human Centipede trilogy, or even the original Mad Max trilogy, you should appreciate the progression that happens in the Violent Shit collection which is now available on DVD from Synapse Films. The original Violent Shit film is bare bones SOV and subversive. Part two is bigger, darker, and mean-spirited. Part three, which I’ve just reviewed here, is obscenely silly and fun. The set also includes Violent Shit vs Axe and Zombie ’90. 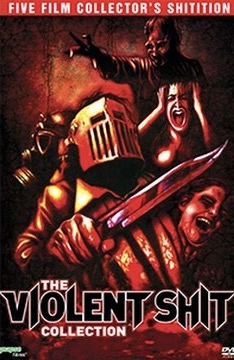 If you’re a gorehound, fond of the Germanic language, or a reel rat like myself, this is a must-see/must-buy.

“and these shitfaces are the prey”