This week we’re talking double features! (Listen to the episode right here.) We put the word out and asked some of our friends to put together their own genre double features. First up: Charley Reed.

“This was actually a double feature that I saw in theaters back when Dredd was new and The Raid had finally received a U.S. release and it is quite a treat because the similarities of the films provide a window to examine their differences.

“Even looking at their basic structure the plots are essentially similar: A rookie cop brought along on a mission to take down a crime lord that commands his/her troops from the top of a massive sky-rise, but that is where the similarities end. 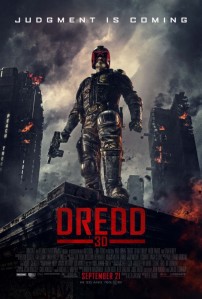 “Ultimately, both are amazing works of art with Raid focusing more on emotion and choreography and Dredd focusing more on atmosphere and special effects, but, together, highlight an incredible action one-two punch to the gut and comparison of unique cinematic visions.”

Thanks to Charley for playing along. (You can hear him on our debate episode right here.)