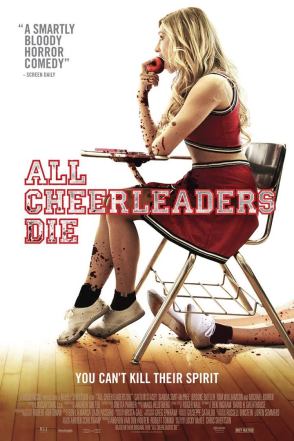 All Cheerleaders Die is a 2013 American horror comedy that takes us to Blackfoot Highschool where a revenge-plot-gone-wrong turns the entire cheer squad into supernatural beasts, turning football players against cheerleaders in a battle to the death.

This is one of those cases where a horror comedy tries its hardest to be both funny and scary but only really manages to give you a little of both. The students fall into typical highschool movie stereotypes; jocks, cheerleaders, stoners, and unpopular kids. The cheerleaders almost exclusively call each other “bitch” instead of their real names, and the football players are dripping with a cartoonish amount of testosterone. Sometimes the characters were too much, occasionally bordering on annoying. This movie had sort of a Jennifer’s Body vibe to it, with the cheerleaders becoming possesed she-demons that must feed on blood for sustinance. The CGI effects are a little shoddy and the violence is pretty mild, save a few scenes.

I’ll give this movie a light recomendation as it was a fun little high school horror movie. Check it out if you wanna have a few laughs, see a group of genuinely unlikable football dudes, and watch one of those football dudes get his head smashed in by a football helmet.

One thought on “Let Me Watch that for You: All Cheerleaders Die”