Okay, now that I have your attention… this week’s blog is NOT about the greatest horror film ever – that is up to each individual, and if you have been keeping up with The Basement on a Hill’s Facebook page and podcasts you would agree with me that everyone has an opinion about what is the best!

Next year this movie will be 40 YEARS OLD!  And it is a MUST SEE if you enjoy classic horror. It is THE cult classic to end all cult classics.  Admittedly you won’t get those 83 minutes of your life back, but that just means one less family dinner with the in-laws you can’t stand. Amirite?  Win-win!

This movie tries so hard to be Airplane BEFORE Airplane (1980). The airline disaster film parody succeeded where Killer Tomatoes didn’t for many reasons:  It was a smartly written comedy with tongue firmly planted in cheek. It also had good actors who could play the smart comedy written for them.  Killer Tomatoes had the right concept – parodying B horror films like Attack of the Fifty Foot Woman (and it’s homage to Jaws is probably one of the funniest moments in the movie) but it lacked the acting chops to make a stilted script work better than it should have. At a budget of less than $100K it’s surprising it works as well as it does. 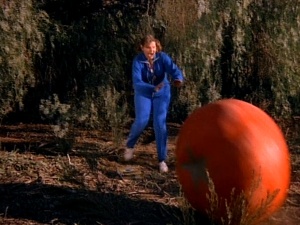 And yet, as I said at the beginning, I love this movie. I can’t explain why. Some of the dialogue is downright funny at the top of the movie, especially the older couple who watch a tomato attack their grandson. The scene where Greta the Olympian gets attacked by the tomatoes is hilarious as you can envision the crew just off camera throwing tomato after tomato at her.  The sound the tomatoes utter makes me laugh.  The horrid acting makes me laugh. The send up of Japanese Godzilla films makes me laugh. The cameo appearance by the San Diego Chicken reminds me of the times it would make appearances at Omaha Royals baseball games when I was a kid and how I had to go see him. Every. Damn. Time.

And my mother friggin’ HATED the San Diego Chicken!

None of these are reason enough to see this movie. Just trust me – take one for #TeamClassicHorror and watch this movie. And then marvel how there were three sequels after it… one starring George Clooney! 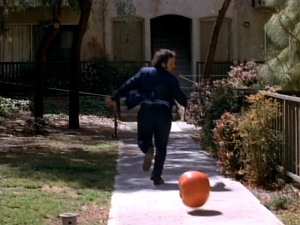