I hope this isn’t too off-putting, but hey, bitch! This week I had the pleasure of watching Drew Marvick’s Pool Party Massacre, and what a pleasure it was!

The only thing I needed in order to get on board with Pool Party Massacre was to hear its title. Anything with Massacre in the title is appealing to me. That coupled with the perfectly 80’s box art made this one a definite fucking must.

Pool Party Massacre is an 80’s inspired comedic slasher made for $6000 in Drew’s parents’ backyard. At least I’m pretty sure I read that on his Instagram or something. By the quality of this film, you’d never guess it was made so cheaply. This is top-tier indie.

Well, Chet. I’m glad you asked! A chick throws a “pool party” (really just a gathering of her and a few of her bitchy friends) and they call eachother “bitch” a lot, before getting picked off one-by-one by the killer.

It’s bloody, it’s funny, it’s both a beautiful homage and a loving farce of the slasher genre. The music also kicks some major bitchass. It’s evident that Drew Marvick is a fan of the genre, and not just capitalizing on the nostalgia trend that seems to be infesting everything these days.

Did you know that Ferris Bueller was just Cameron’s dirty sanchez all along? I have proof! Drew Marvick confirmed this himself!

But now, bitch, I’d like to take this time to plan my own pool party.

First I will invite like…45 people to attend. I found it hilarious (in a good way) that they kept referring to their little gathering as a party. A chaotic atmosphere with many side characters…er, I mean bitches, FUCK! I mean friends, having their own twisted shenanigans is always fun.

My pool party will involve actual swimming. None of the characters (besides the hairy and obnoxious Clay) ever set foot in the pool. Terrific satire on the part of Pool Party Massacre, but gimme more wetness and a diving board jump or two.

Fireball. At least 27 gallons of it.

Nighttime! My pool party would go well into the night instead of stopping abruptly at midday due to lack of breathing guests.
Oh, and all guests are required to bring titties.

I will be this film’s biggest proponent, and am eagerly waiting to see what Drew Marvick does next.

Stay Slime, and be rad at all times
-Rat 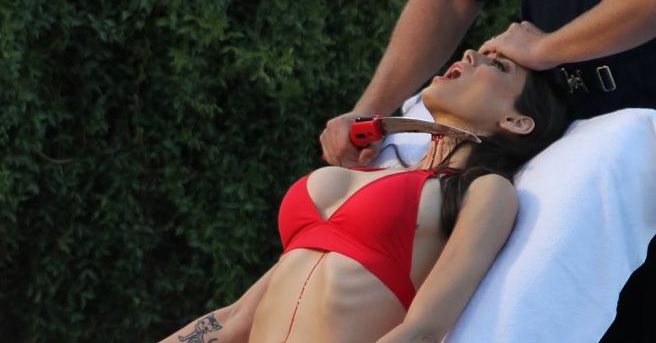