If you’re the slightest bit of a horror fan, you know who Bill Moseley is. Choptop from Texas Chainsaw Massacre 2. Otis Driftwood from House of 1000 Corpses and The Devil’s Rejects. That’s just to name three films. According to IMDB, he is one of the most prolific actors working today with 114 actor credits to his name!

I was thrilled to be able to chat with him for a few minutes ahead of his appearance at The Alamo Drafthouse on July 29 for a 35mm double feature screening of House and Devil’s. I figured since we only had about 15 minutes, why not ask him the seven questions we’ve asked every guest we’ve on the podcast? And along with his answers came some fabulous stories.

Let’s see here. The first one I ever remember seeing was The Blob starring Steve McQueen. It came out in like the ‘50s; I was maybe four or five years old. I was visiting Granny – my mother’s mother in New York City – and I wanted to see The Blob because it looked like kind of a cool thing, this big blob killing people. So Granny took me to The Blob, and it just scared the crap out of me. Especially the scene where The Blob is squeezing through the projection holes of a movie theater, and it was so scary. That kind of started the ball rolling.

When’s the last time you watched the original one?

I don’t know. As it turns out I was in the remake of The Blob, so maybe I watched it back then. That was actually the first job I got since moving from New York to Los Angeles. That must’ve been ’86 or ’87. I moved here right after Chainsaw 2, so maybe the fall of ’86. So that might’ve been it. I had a friend that called up and said, “Hey, I’m supposed to play ‘Soldier #3’ and I can’t do it,” or maybe he was calling on behalf of a friend. Somehow I was told to drive from Los Angeles about an hour north to Valencia, CA, and I drove out to the studios and I was going to meet with Chuck Russell who directed The Blob remake. I went in and I remember saying, “They’ve got ’em. Bigelow and Wilson. They were inside it, trying to scream.” Chuck liked what he saw, and he said, “Hey, can you show up tomorrow?” So I showed up, and I was just supposed to get one day’s work, but then Shawnee Smith slipped on some wet sewer set, and bruised her coccyx. So she was done for the day, so they told me to come back the following day. And then the following day, she overdosed on Niacin. I think she was taking Niacin vitamins to try and not get sick in the air conditioning and the wet conditions of the movie, and of course it was 100 degrees outside. So she took a little too much Niacin and felt like she her skin was burning, so they had to bring me back a third day. So when I was invited months later to the cast and crew screening of The Blob, when her name appeared on the opening credits I stood up and applauded because she made me a couple extra hundred bucks, so I was very appreciative.

How would you want to die in a horror movie?

Well, there are many ways. When I did the remake – and R.I.P. George Romero – when I was in Washington, PA doing the remake of Night of the Living Dead… I got the job because I’d worked with Tom Savini (dir. NOTLD 1990) on Texas Chainsaw Massacre 2. He was the gore-meister of Chainsaw 2 and makeup artist. So we developed a great friendship, and when George drafted Tom to direct the remake, Tom sent me a copy of the script and said, “Hey, I’m doing this, read it, and pick any part you want.” Of course, I picked the part of Harry – the guy in the basement – because he had the most lines, and I figured I make the most money that way. And I told that to Tom, and Tom said, “Uh, pick any character. Just make sure it’s Johnny.” So I boned up on how to say, “They’re coming to get you, Barbara.” I got some Boris Karloff movies, and the one I remember using as my template was Die Monster, Die with Nick Adams. And I said to Tom I saw that Johnny basically dies and that’s the end of it, he doesn’t even come back. And I said, “I have this great idea for Johnny’s death. Imagine Johnny’s now a zombie, Barbara’s in the house all Sigourney Weaver-badass, and Johnny comes into the house, randomly slips in, looking for something to eat. As I walk toward Barbara, she goes ‘Johnny?’ And she’s sort of hypnotized, and I’m coming closer and closer and she can’t move because I’m her brother, maybe there’s something left. So she’s in grave danger. So Tony Todd walks in the room with his machete and casually lops off my head, not realizing the connection. My head, then, goes rolling on the carpet, and that breaks Barbara out of her hypnotic moment, and she goes, ‘Johnny!’ As my head is rolling and comes to a stop, when she yells, my eyes roll up.” So when I described that to Tom in great detail, he listened patiently, and then he said, “That’s a great idea, but they’d never pay for that.” Not in the budget, man. Not in the budget.

What’s you favorite scary book? Do you read a lot?

I do! That’s a good question. My favorite scary story is At the Mountains of Madness, H.P. Lovecraft. I just love that story. It’s so cool. I love Lovecraft anyway, but I love that story in particular. There was a time a couple years ago when Guillermo del Toro and James Cameron had teamed up to pitch a $200 million, I’m sure, version of At the Mountains of Madness. But they were going to do it just the way it was in the book. So in the ‘30s, sled dogs, no GPS, no cell phones, no nothing. Basically, a guy’s exploring Antarctica, and it just sounded so cool. Imagine Guillermo and Jim Cameron teaming up for that story. And they couldn’t get the budget, couldn’t get the green light. And then Alien (Prometheus) – not the current one, but the one before it – came out, and Guillermo abandoned the project because he thought Ridley Scott had covered the same ground. And… ah man, I really wanted to be a part of that. 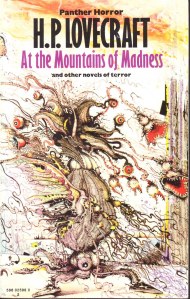 Have you ever worked with James Cameron or Guillermo?

I interviewed James Cameron years ago. I used to work for a magazine called Omni, and I interviewed him, which was a great, great interview. (Read the interview here.) And Guillermo – he’s a fan, I’m a fan of his – but we’ve never worked together.

What has been your favorite Halloween costume you’ve ever worn? Do you remember the last time you dressed up for Halloween – whether it was for a party or the holiday itself?

Well, I always put masks on because I own a bunch of cool masks – a bunch of Eric Pigors masks, toxictoons.com. I certainly have some cool masks that I’ve collected over the years at the different horror conventions I’ve attended. So usually I just put masks on. I do remember in second grade I got a really cool fireman’s costume. I remember sitting in class, and there was a little bit of open seam on the leg, and I remember starting to pick at it. I picked at it and picked at it, and before long I had completely shredded it and you could see my underpants. I remember being so embarrassed because some of the cute girls were laughing at me. I ran to the bathroom in the classroom and barricaded myself in. I didn’t know what to do. I came out just holding this torn seam closed. So that was the most poignant costume. And I’ve never worn a fireman’s costume since.

Tell me about the most terrifying nightmare you’ve ever had.

I have two that I can think of. One was when I was kid and I remember coming to consciousness and I’m lying on a Midwestern rolling hill. I’m in some kind of a clover field, and I’m just lying on my back. I go to roll over and I realize that my hand is tied to the ground. And then the other I realize is tied to the ground. I try to move my feet and they’re also tied. So I’m spread eagle, tied to the ground on this hill. I stop fighting, and I look into the clear blue sky and there was a tiny black speck, and I realized it was getting bigger and bigger. As time passed, it got really big, and I realized it was a gigantic slab of concrete heading right for me. And the other scary dream I had was… my mom was a good tennis player back in the day. My mom was trying to play tennis, but she only had one leg. And people were hitting balls at her, and she was trying – she was really trying in earnest – but she could only hop and she was missing all the tennis balls. I remember waking up crying.

Did your mom really only have one leg?

No. No she didn’t. So that was the nightmare. She had a couple of good legs. So I don’t know where that came from.

You’re in a zombie apocalypse. You have one weapon, but it’s not a gun. What is that weapon?

It’s just fun. I am from the Midwest, so you never underestimate the value of a good pitchfork. And it’s fun. Just stab them in the eye. I suppose, practically speaking, going by the George Romero rules, you kill the brain and you kill the zombie. Maybe a Louisville Slugger, or some kind of easily-wielded hammer of some kind just to smack the brain. But I’ll stick with a pitchfork.

Who would win: Jason, Freddy, Michael Myers, or Leatherface?

Get your tickets for Bill Moseley Live! right here.

One thought on “The 7 Deadly Questions w/ Bill Moseley”