I am embarrassed to admit this, but I’m just now getting caught up on The Basement on a Hill podcasts. The really stupid thing is, for months I’ve been trying to figure out what to listen to on my drive to and from work, as the news as of late has been feeding my tendency to rage on the road. A friend of mine suggested Serial, and for anyone under a rock (like me apparently) who has not listened to this awesome podcast, please do so!  But only after listening to The Basement on a Hill podcast of course. <wink>

So today I was catching up on the podcasts from February…shut up…and I was listening to two theatre colleagues (and friends) discussing the movie Carrie and discussing the feminist movement. While not wanting to tread on another bloggers territory (please check out the EXCELLENT blogs by Michaela Sears on this website) the movie I’m going to be discussing this week generated A LOT of criticism from the feminist movement of the mid – 70s because of the way women were portrayed – as sex slaves being controlled by their misogynistic husbands. Others, including members of the cast, argued that was the point of the entire film – to point out the rampant sexism in the United States.

Spoilers ahead, so if you haven’t seen the film and would like to, stop right now, watch the movie, and then come back and finish reading.

Joanna Eberhart (Katharine Ross), a self-prescribed feminist and budding photographer, is being moved from the hustle and bustle of New York to the quaint little town of Stepford in somewhere USA. One could conceivably believe Stepford is relatively close as the drive in the family station wagon lasts less than a day.  From the beginning you can tell that there is friction in the marriage – Joanna doesn’t want to live in Stepford. She wants to be where the people are, the excitement. For his part, her husband touts how great it will be for the kids. Not long after a neighbor drops by with a casserole and introduces herself. She is friendly, but Joanna’s husband Walter senses something is a little different about her. Later, while walking the family dog, he runs into the casserole woman’s husband. With a single sentence the audience is let in on the first secret – Walter and this man not only know each other but this man recommended Walter move to Stepford.

Within a relatively short period of time Walter has joined the Men’s Association. While he would like Joanna to believe all they do is sit around, drink and watch dirty movies, something far more sinister is going on. Joanna, meanwhile, is having a hard time making friends – all of the neighbors are obsessed with cleaning and baking. Joanna finally finds a bit of relief when another couple moves to town and she finds out Bobbie (Paula Prentiss) is as much of a feminist as she is. They quickly meet up with a third woman, Charmaine (none other than Ginger herself – Tina Louise!!),  a rich woman who has no use for cleaning or baking, only playing tennis on her fabulous new tennis court. Together this merry band of Three Musketeers decide to re-establish the Women’s Association and they invite the women of the town to come. No one comes – they are too busy with their housework and their baking to partake in a movement like that! Disappointed, the trio vows to keep trying.

One night Walter invites the men from the Association to the house for a meeting. It is here we meet the head of the men’s association, Raymond Chandler, who designed all of the animatronics for Disney.  He is the epitome of a misogynist – he steps into the kitchen, sees Joanna preparing snacks, and comments how he always loves watching women performing domestic tasks.  (oops…) Joanna has a nice comeback, and then proceeds to invite herself to the meeting, where another member sketches her.

Eventually with all the visual and verbal cues the audience starts putting together the pieces on this little quarter of the world. And so does Joanna. So much so that she knows with the leverage she has she can manipulate the men into letting their wives join the new Women’s Association. Which they do – for one meeting. Except all they want to talk about is how to clean the house more efficiently, and how to become a better baker. Soon after, some of the Stepford women begin to act strange – one woman gets into a car accident and begins to repeat herself. Later on after having one too many drinks at a party it happens again. Charmaine and her husband go away for a long weekend – after returning she allows her husband to rip up the tennis court in favor of a pool, and decides cleaning is way better than tennis anyway. Bobbie and Joanna get scared that something is in the water causing the change – they contact a friend of Joanna’s in the city and ask for the water to be tested – everything appears normal. Bobbie is scared she’s going to change. Her husband decides to take her away on a long weekend – and lo, and behold, when she gets back not only does she not want to be a part of the Women’s Association, she wants to be the next Betty Crocker! And, to top it off, her breasts perked up and grew two sizes! 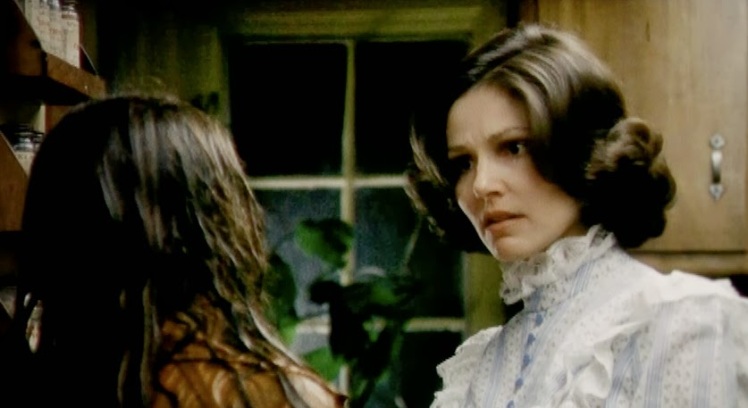 I won’t give away the ending, but from what I’ve said so far, you can understand why feminists were so upset by the portrayal of the women and the misogyny of the men. The first few times I watched this movie while growing up I was too young to realize the commentary on society. The message of the Stepford Wives was no doubt lost on most of the audience that came to see it. For those who did get the message, it seems as if they were told not to overreact – an attitude which hasn’t changed very much in the past 22 years. The message is still trying to get out. Series such as The HandMaid’s Tale are trying to make inroads today.

This is a movie high on my list of classic horror films for many reasons. The message behind the movie is as relevant today as it was in 1975. Is anyone listening?