It’s no secret by now that I’m a massive Troma fan, so when Zac Amico agreed to this interview, I was delighted. This is the closest to Troma I have been, so if I’m giddy cut me some slack. Zac is a fan in his own right, which says a lot about Troma. Working for Uncle Lloydie and experiencing the trials of making a Troma film hasn’t seemed to dim his fucking shine for the company in the least. Along with acting, Zac is a podcaster, comedian, and writer… a creative cretin through and through.

What are you wearing?

Currently? Shorts, a Frankenstein t-shirt and a Pabst Blue Ribbon hat, my casual uniform. In your fantasies? Combat boots, a mini skirt, and spiked football pads like The Road Warriors.

What are your favorite Troma films personally? Let’s do a top 3.

Tromeo and Juliet will always be my favorite. Working for Troma made me love Terror Firmer more than I originally had because its like stepping in a time machine. And there’s a movie Troma distributed called Fatty Drives the Bus that is secretly the funniest movie ever made, it’s kind of like a secret handshake for people that have worked there to know how great it is.

It is a lifelong dream of mine to meet Lloyd Kaufman. I presume the same was true for you. What was meeting and then consequently working for him like? Can you recall your first encounter?

I’ve been obsessed with Troma since I’m 13 years old, so I was fan boy-ing out pretty hard but managed to keep my composure. I was in college working on a short film and Lloyd came to do a seminar for a class I wasn’t in. Luckily I weaseled my way in and got him to hang out to do a quick cameo where he looked at a girl’s hiney and she puts Drano in his coffee. He couldn’t have been nicer, and later in the year I got an email with Troma asking about acquiring some of my college films. I interned for about a year and change, left to work on a project, and went back in to audition for Return to Nuke ‘Em High. I wound up getting the part(completely based on the fact that I said I would do full frontal nudity) and then hired in the AD department. I’ve been pretty close with Lloyd since then, and he is an incredible, supportive, and endlessly entertaining psychopath.

You’ve acted in a couple Troma features now, including one of my favorite movies ever in Return to Nuke ‘Em High. Could you share a bit about what it’s like to work on a Troma picture?

Your first Troma feature is filmmaking boot camp. If something can go wrong it will, or it’s gone so wrong in the past that Lloyd will be obsessed with making sure you know what can go wrong. I was incredibly fortunate in that I got to have a good amount of creative input in both my character and other aspects of RTNH and Lloyd is very willing to listen to his cast and crew and has great instincts as far as what will be funny on screen(not just on set to the sleep and food deprived people working on it).

For Return to Nuke ‘Em High over 60 of us lived and worked out of an abandoned funeral home in lovely Niagara Falls, New York. We slept, for lack of a better term, asshole to elbow on the floor. The funeral home was our living space, office, special effects workshop, and served as a set for multiple scenes. It couldn’t have been more fun and I miss it every day. 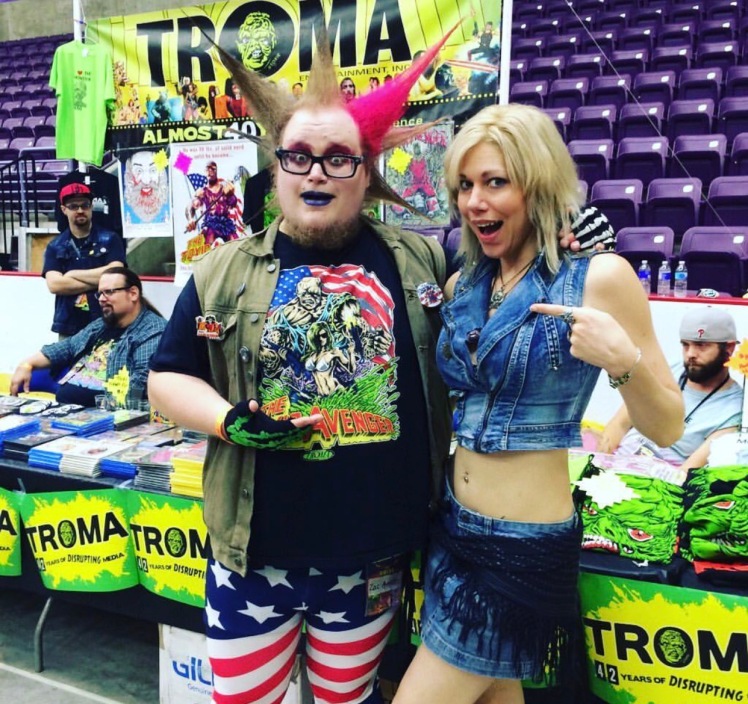 What is your inspiration behind your bizarre look?

Prior to my comedy and film career I was actually in a synthpunk/goth band. I used to paint myself different colors, spike out my hair, and dress in a mutant version of drag, all the same stuff I’ve kept elements of in the look I go for when I’m in promotion mode. When I’m working on something I want people to watch I like to make sure I’m memorable and that people would want to know who I am, and if they do I want them to want a photo with me, so all the weird shit I do to myself is for self-promotion, but also because I genuinely enjoy it.

At this point you have almost become Troma’s third mascot After Toxie and Sgt. Kabukiman, but you are involved in other creative endeavors as well. How is the comedy and podcast scene?

As good as it’s ever been. My podcast, The Real Ass Podcast, which I co-host with fellow comedian Luis J. Gomez, is building a very dedicated and supportive fan base. I have been on the road doing stand-up more and more, and it looks like I may be touring next summer.

I read somewhere that you’d like to make your own damn movies. Would these be low-budget trashy affairs? (fingers crossed)

I’ve made a few little movies, with Troma set to release some of them in the indeterminate future. I do plan on making my own stuff again soon, and most of the stuff I have written is definitely gory, trashy, and offensive. I hope to direct one of the features I’ve written after the Return To Nuke ‘Em High Vol 2 is released on DVD and we’re done with all the promotional work.

What is your relationship with Sgt. Kabukiman?

My relationship with Kabukiman is a long and storied slew of countless nights of debauchery. Sometimes lovers entwined in a torrid struggle of passion, sometimes bitter enemies embattled in a lifetime of lust, always astonishingly drunk.

What is your proudest accomplishment so far, and what is your ultimate goal?

My proudest accomplishment is getting to be a part of the Troma universe, giving the fans a movie I hope they love, and getting to see the look on audience’s faces when they see my awful pierced dick. My ultimate goal is make my own art on my own terms and be able to tour the world with it, bringing my toxic slime lathered lifestyle to cretins all over the planet.

Thanks again to Zac Amico for the interview!

Stay slime, and be rad at all times