This week brought back two of my favorite people in the entire world. Adam Robert Haug (aka Haunted Gauntlet) is one of the most creative and inspiring individuals I’ve ever met. Every time I look it’s like he’s making something new and different. On Friday the 13th he unveiled his latest creation – Blessed Possession – a new album of spooky tunes in the style he’s known for. The best part, though, is that you can purchase the album in VHS form! I saw one of these in person and I have to say that it’s one of the coolest things I’ve ever seen. You can go to the Haunted Gauntlet Bandcamp to check out the new record. 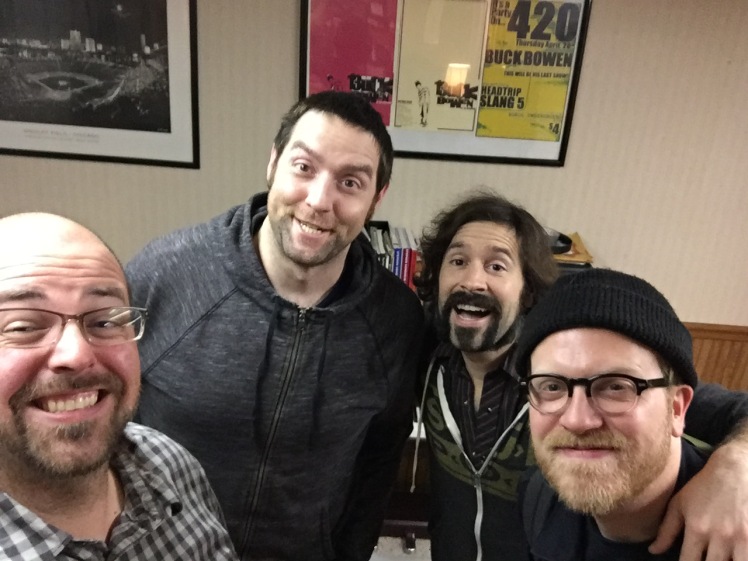 Also joining us this week was comedian Ryan de la Garza. A guest of the show on numerous occasions, Ryan is starting his October residency in The Basement. He’ll be joining us for The Horror Exam Live! on Saturday, October 28 at Barley Street Tavern, and he’ll be back on the show with Mike Perry for our Halloween show on October 31. We know Ryan from his comedy show You Had To Be There, and he’s combining forces with Adam to bring us Spewfest 3 on Friday, October 27, a night full of music, comedy, and all around Halloween goodness.

This week we centered our lists around a movie we all grew up loving – The Monster Squad. Knowing how great of an introduction to the genre TMS provides, we each listed off five of our favorite gateway horror gems. Each of us defined our lists differently, so we had an eclectic – but brilliant – list of films. As always, click the poster art, buy the DVD/Blu, and in doing so you will financially support The Basement.

In the 80s we learned that walls were meant to be torn down; we learned that business was to be kept up front while the party raged on in the back; Crocket and Tubbs showed us what cool really was; and we learned that Wolfman did, in fact, have nards. Dracula is awakened after being buried for hundreds of years, and he’s getting the gang back together. Along with Wolfman, The Mummy, The Creature, and Frankenstein’s monster, the Count sets out to finish the job he started before Abraham Van Helsing squashed his plans. But first the king of all vampires must defeat the thing that has made mankind shiver with fear since the beginning of time… children. C’mon, don’t be chickenshit, it’s only The Monster Squad.