Someone I now consider to be one of my closest friends – Rob Bruns – first appeared on the show in 2016, bringing this lovely little movie along for our feature presentation for that episode. At the time he suggested it I’d never heard of it. After watching, although not loving it, I thought, “How in the hell did I miss this growing up?!?!” This is almost a perfect gateway horror movie. Exciting, thrilling yet not terrifying, with kids as our protagonists; therein lies the perfect recipe for a gateway horror movie. Stream for free on TubiTV. 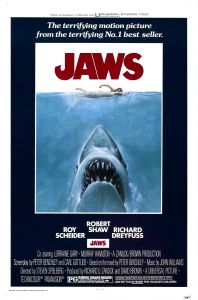 Although I wouldn’t DARE watch this in October (for Pete’s sake, it’s a summer movie!) I really think it’s a great, thrilling family movie. Sure, sure, people are devoured by a monstrous great white shark, but it’s no worse than an Indiana Jones movie (also great). The little ones won’t pick up on the subtle humor or moving dialogue, but the movie is exciting enough for the summer months (even at 2+ hours). Streaming now on Netflix.

It’s only fitting that this near-masterpiece be included on this week’s streaming list since it’s our current feature presentation. I think Adam made a good point on this week’s episode: you were either a Goonies kid or a Monster Squad kid. I, for one, was a Monster Squad kid. This is an ultimate “kids on bikes” movie that hits all the right bases: funny, scary, exciting, touching. Currently streaming on Hulu. 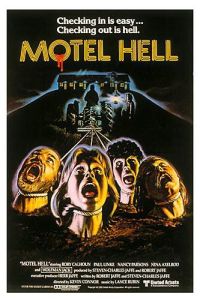 Let me be up front: I haven’t seen this since I was probably 10 years old. I remember running across it on the TV one Saturday afternoon, stopping, and sitting down for the rest of it. I then went to the video store to rent it so I could see the whole thing. I don’t remember being scared one bit, but man was it entertaining! The plot is just ridiculous enough for a child to realize… well… its ridiculousness. Streaming free with ads on Vudu.

A few weeks back I admitted one of my biggest movie shames: I’d only seen two Universal Monster movies (Dracula, Frankenstein). Last week I added a third (The Wolf Man). Now it’s like Sam Zimmerman actually listens to the podcast and said to himself, “You know, that Anthony REALLY needs to catch up. Let’s add the Universal Monsters for his benefit.” Dracula, Frankenstein, The Wolf Man, Bride of Frankenstein, The Creature From the Black Lagoon, and The Invisible Man. All at the click of a button! This weekend has been planned, thank you very much. Now streaming on Shudder.