DISCLAIMER: Hauntedween is not about a haunted penis.

What else isn’t Hauntedween? Is it—
Satanic? No.
Ghostly? No.
Ghoulish? No.
Zombified? Nope!
Porky’s, but with more blood?
YES!

So it’s basically a lazy sex comedy with slasher elements and you know what? I didn’t hate it. 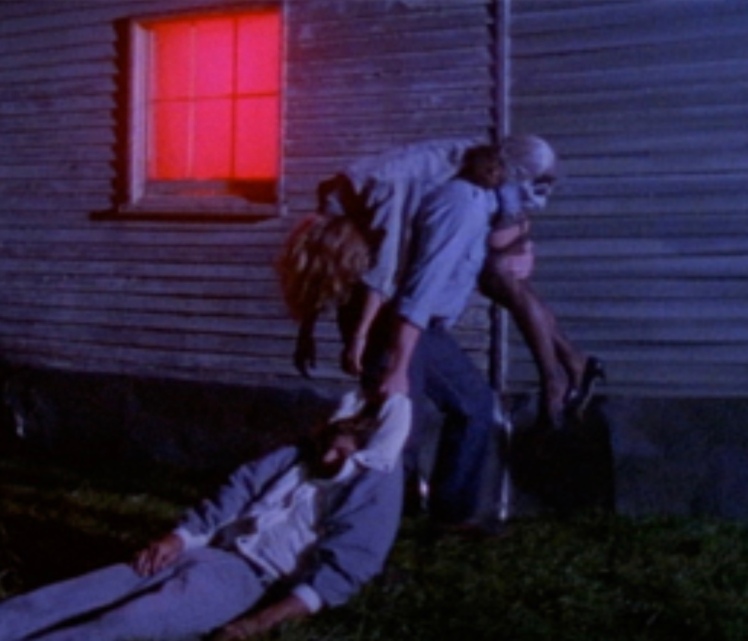 The whole thing begins with little Eddie. Eddie is working admission to the Burbur haunted house. He desperately wishes he could work inside and scare people, but he has to work at the gate because he is too young. Bummer.

Some drunk Sigma Phis drive up and teach him their secret handshake (it looks like a regular handshake).

Lil Edboy decides to sneak into the haunted house anyway AND MURDER A YOUNG GIRL. Fast forward 20 years. The current Sigma Phis need to raise $37,000 to keep their fraternity alive. They decide to run a haunted house at the old Burbur house, where Eddie had killed 20 years previously. The Sigma Phi treasurer (looking and sounding like a less naive Kenneth from 30 Rock) was granted the key to the house by a “Sigma Phi alum” with express permission to run a haunted house. It’s a good thing he remembered that complicated Sigma secret handshake. But Eddie has something more sinister planned.

After some breasts and montages of fixing up the haunted house, and as many shoehorned comedy scenes as you could possibly take, it’s showtime.

Eddie has constructed a Kill Room where he would perform his exhibit at the end of the haunted house (unbeknownst to the Sigma Phis) and put on a show killing off the Kentucky fried fraternity bros. (He even bothered to decorate his kill room with Pumpkinhead and Leatherface standees). It’s an amusing affair as he crawls in and out of the house in the least dignified way possible, and also as he pantomimes playing baseball before actually hitting a homer with a frat bros head.

Along with a killer with zero motivation, some boobs, some blood, and some bad gags, Hauntedween has bloodthirsty patron children, an exploding van, and a half-assed romance angle! What more could you ask for! I definitely recommend this movie for fans of Losin’ It, Meatballs, Screwballs, Porky’s Revenge, Schlitz, The Bluegrass State, wifebeaters, and the Greek alphabet.