This week it’s a rap cuz the well is dry
a new keg to tap, a new fish to fry
I found this feature from an indiegogo campaign
I reached down into my wallet and made it rain
And now the movie is real and it’s on my shelf
Someone give me a hand, my back wont pat itself 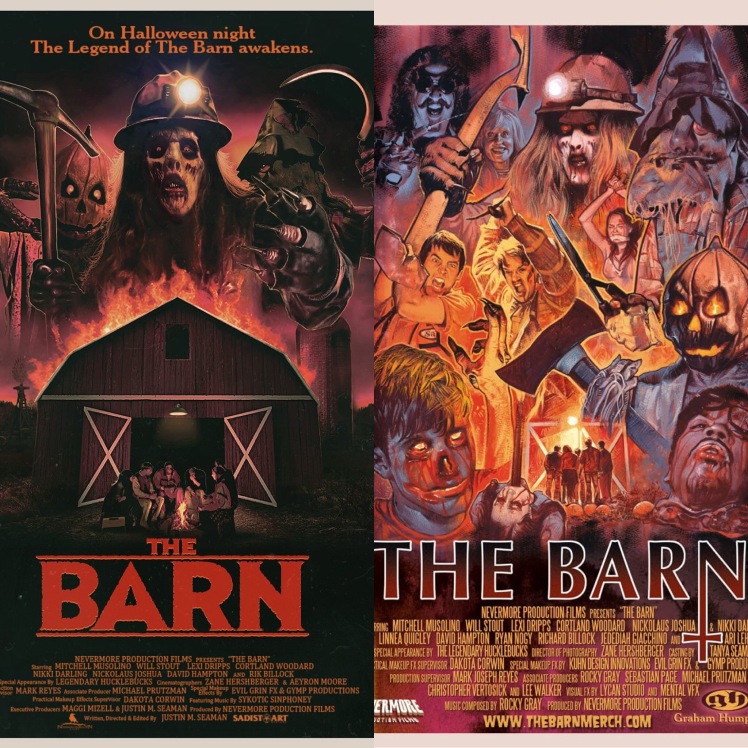 I hit play on the player and The Barn began
It was time to party down with the Boogeyman!
A-yo the Candycorn Scarecrow and Hallowed Jack
rounded out the demon trio triple attack!
But let’s take a step back because there’s a plot
That’ll thicken your blood and fuckin make it clot

Sam’s a halloween purist in ‘89
He upsets Linnea Quigley, and that ain’t fine
So now him and Josh need to pay the price
and collect goods for the church, shucks ain’t that nice?
But he figures they can also still trick-or-treat
and hit up a concert for a night that can’t be beat.
His crush comes along, with a couple of friends
I suspect they won’t all make it to the end.

Yoyoyo I’m the Boogeyman and I’m here to say
I’m like a dead miner and I love to slay
I’ll drive my pickaxe straight up into ya dome
Instead of beggin for treats you should get your ass home
I tunneled up from hiz-ell, now I’m in the hiz-ouse
Noone would watch Riverdizale if it weren’t for Cole Sprizouse

You know what?
I can’t do this.
This is stupid.

The Barn is a fun little 80’s throwback. It has fun cameos by scream queen Linnea Quigley and Ari Lehman (best known as the first Jason Voorhees).

It isn’t a farce or a spoof, but a real loving homage to those films of yesteryear. It probably has something to do with director Justin Seaman’s love for this project, having worked on it since tykedom. The kills were rad, especially during the hootenanny massacre. Btw, I’m going to give The Barn 24 hours to trademark the name Hootenanny Massacre or I’m stealing it for myself.

The Barn is a nice change of pace for your Halloween season, and could easily go in rotation with such films as Night of the Demons and Trick ‘r Treat. I say give it a whirl. If you’re here and you’re reading this, I doubt you’d regret the purchase. Also if you are a potential employer looking back on my reviews for examples of my work, I implore you ignore this particular review and go read my reviews of The Taint, Sleepaway Camp II, or Witch with Flying Head instead.

Stay slime, and be rad at all times!
-Elliot “Rat” Ross