Leatherface, Michael Myers, Jason, Freddy, Chucky, Ghostface, Jigsaw. I’ve been saying it all week, and I’ll keep saying it. Art the Clown is the next horror icon, and you can place a lot of the blame on David Howard Thornton for that! He was given the character and he ran with it to create the wonderful villain on screen in Terrifier. Terrifier is now on VOD, go see for yourself if Art really makes Pennywise look like Krusty. But before that, enjoy my interview with the man behind the facepaint.

David, thanks so much for joining me! Let’s get right into it! What was it like playing Art the Clown?

An absolute blast! This is truly a dream role. I’ve always loved doing comedy, especially physical comedy, and I have always loved playing the bad guy (it can be so therapeutic!). This way, I got to blend all of that together into a fun and crazy role where I was given a lot of room to play around and experiment with the character. He’s definitely not a boring character to play, to say the least! Plus there is a fun challenge behind him since he is completely silent. I had to abandon my greatest skill set, my voice, and rely on my physical abilities and facial expressions to bring the character to life. I’m simply grateful to have the chance to undertake such a fun and challenging, as well as iconic role!

You were truly horrifying. What was your thought process in regards to bringing Art to life?

Thanks! I was hoping that would come across. LOL! As for how I got into his head space, I first engrossed myself in Mike Giannelli’s original interpretation of the character from All Hallow’s Eve to absorb the nuances of the character. I then dug deep into my love of the great physical comedians in cinema (Chaplin, Keaton, Marceau, Carrey, Sellers, Atkinson, Jones, and my dear friend Stefan Karl) as well as iconic villains (most notably The Joker, Pennywise, and Freddy Krueger ) put them all into a blender and hit “frappe” to create my version of Art.

What did you personally enjoy about the finished film?

Watching the audience react. At the moment, I have watched it 3 times with audiences and absolutely loved watching how they reacted to the film. Every laugh and every scream brought me utter joy! I was even happy to see some people get up and leave during one infamous kill scene, because that meant that we had reached that person and affected them in some way. I have usually hated watching myself on film, this time that was not the case. It is a fun film to watch, and even more fun to watch how other people react to it. Pure joy!

Are you a fan of horror yourself?

Very much so, though not until my senior year of high school when I was dragged to a screening of Scream 2 by my friends. Prior to that, I was afraid of horror movies because I had let my mother’s fear of them influence me in that way. After I watched Scream 2 I found them to be fun and thrilling to watch and binged the crap out of them during my college years to catch up on lost time!

Your instagram page claims that you specialize in over 200 character voices. Any voices we would recognize?

Mainly a bunch of famous cartoon characters. I do everyone from Bugs Bunny to Sponge Bob. One of my dreams is to be the voice of Bugs or Mickey one day. I have done a considerable amount of work in video games and animation as well. Lately, it seems like I am getting a lot of work doing various sounds for animals and creatures, which is a whole lot of fun! That is how Frank Welker has essentially made a name for himself, so why not me? I have a few videos up on YouTube where I do some of them. You might enjoy my rendition of “Let It Be” that I affectionately call “Let It WB” since I sing it as a bunch of Warner Brothers characters.

And yet, Art the Clown is mute! Surely that’s a wildly different skill set!

Yeah, life is funny that way! I’ll most likely be known for playing a guy that doesn’t speak! Could be worse. I could have ruined a certain iconic clown in a certain superhero film… but I digest!

What do you think about a potential Terrifier sequel?

I love it! Damien and I are already spit-balling ideas back and forth and are ready to start tackling a new script if Terrifer is successful enough. We’d love to get some backers behind us for future films. I’m constantly amazed with what we accomplished on this film with such a limited budget. It is a true testament to Damien’s talent! I can only imagine what we could accomplish with a bigger budget in future films. Believe me, we have LOTS of fun ideas and directions to take the character in! We especially want to set up a truly kick ass protagonist for him to go up against in future films. This Joker needs his Batman and we intend to deliver!

Do you find it surreal to be on T-shirts? Your face will be plastered on the chests of people you’ve never met!

I’m still trying to wrap my mind around all of that. It is unbelievable and just so humbling to me. I never imagined that something like this would ever happen in my life. I mean, I am just a skinny geek from Alabama that just got lucky enough to stumble into something so crazy and amazing. There were so many years of my life where I was bullied for how I looked. I never imagined that people would think I was cool enough that they would wear me on their shirts and tattoo my face on their body etc. It has literally brought tears of joy to my eyes on many occasions. I’m truly blessed. I thank all of the fans for the support. It means more than they realize!

If Art becomes iconic (which I am fully predicting), do you have it in you to attend conventions for the rest of your life?

Definitely so! I actually signed a contract for my second convention later on this year which will be taking me to England! This is all new territory to me, so I am in the process of trying to figure out how to make all of this work. Oddly enough, it has been a dream of mine for a while to do conventions one day. I think it is a great way to meet the fans that have been instrumental in giving me these wonderful opportunities and thank them for doing so. I am looking forward to many more of them, hopefully!

Finally, what are your ultimate goals?

To simply make a living doing what I love doing, and that is entertaining people. Sure, I have my dream roles such as playing the Joker on film, Jack Skellington on stage (why is that not a Broadway musical yet? Tim Burton and Danny Elfman , call me!), being the voice of Bugs Bunny or Mickey Mouse, and creating an iconic film role. I’ve hopefully attained one of them. But yes, my ultimate goal is to simply be able to entertain people and bring a smile to their face in one way or another. Time will tell! Until then, I am enjoying the ride! 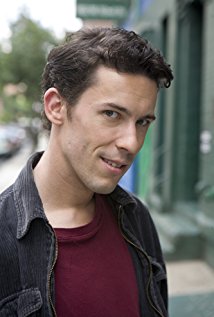 Thank you so much for your time!

Thank you as well, and thank you to all of you that are reading this and supporting the film! It is appreciated more than you can know!