When it comes to creature features, you could do worse than Bigfoot. Come to think of it, I haven’t actually seen a decent Bigfoot movie. Then again I haven’t seen too many to begin with. There’s Harry and the Henderson’s… but no. Well what do you expect from a genre about a hairy ape bear man whose most defining characteristic is his shoe size? But thank Jesus H. Christmas and the cryptozoological gods because now there is Abominable (on bluray).
The title is not a reflection of the film itself. Abominable is a pocketful of wonderful. With sprinkles! Let’s break down why.
First there’s the haunted face of Matt McCoy. More on that in a bit. McCoy plays Preston Rogers, a man that is going back up to his cabin for the first time since a climbing accident six months ago that left him widowed and in a wheelchair. He spends most of the film in his wheelchair, watching the young girls at the neighboring cabin with his binoculars. Somehow he manages to do this in a way that is more fatherly and amused than creepy and perverted. He watches fairly helplessly as The ‘Squatch murders the holy hell out of some teens. His perfectly haunted face makes him a great fit in this role. His soul jumps out into his icy eyes and the nooks and crannies of the shadows in his face, elevating the audience’s nerves. The camera angles, the cold breath lingering in the air… one review I read said this is like one long episode of X-Files with a budget. I can’t disagree, and neither can Matt McCoy’s visage. 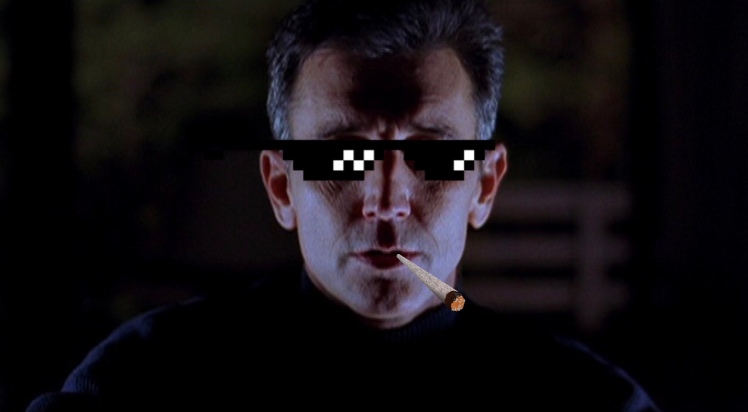 Secondly, Abominable doesn’t beat around the bush. This is a movie that doesn’t speculate on the existence of Bigfoot or get bogged down by mythos and lore. It’s not a docu-drama and doesn’t claim to be based on true events. This is a movie that begins and ends with the Squatchman fuckin’ shit up. As noted above, this is a slasher film with a Rear Window angle, featuring a pissed-off yeti. What’s not to love, brethren?
Alright, now let’s talk ‘Squatch. In this flick, Bigfoot is not depicted as one of God’s misunderstood creatures. No, he is just a mean bastard with bad intentions. Also, this beast is a practical one, making him all the more gruesome. Kudos to whoever insisted the film required the use of practical FX. They were right. Whether it’s Bigfoot’s evil mug, a body being folded in half the wrong way as it’s yanked out of a window, or Squatchy eating half of someone’s face off, the effects deliver, and keep Abominable from being easily written off as more SyFy caliber crud.
For me, personally, the film could have been ten minutes shorter, but that’s only because my attention span is lacking these days. The bluray really delivers and looks spectacular. Now if only the powers that be could find movies in the same vein about chupacabras and Jersey devils! However, I will also settle for a sequel to Abominable called Abominabler, where Bigfoot is meaner and kills people by poisoning their drinks and stabbing them with a Crocodile Dundee-sized knife.
8/10
Stay Slime, and be Rad at all times!
-Rat