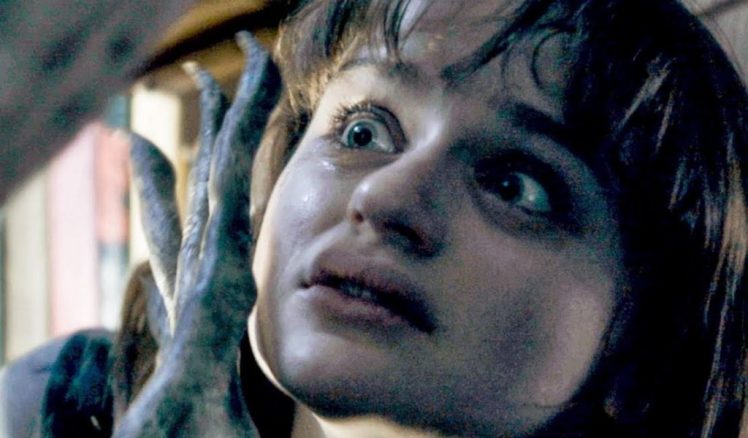 They don’t make many movies like Slender Man….and that’s great news. There is a lot to hate about this film and I’m going to struggle to find anything positive to say about it. One of the first things you learn when you begin reviewing movies is that it’s important to find something good in each film. No matter how terrible the movie is, there has to be something good you can mention. I’ve never had a problem doing this but I had yet to see Slender Man.

My knowledge of Slender Man going into this film was almost non-existent (after seeing the movie, I still don’t know anything because nothing that happens makes sense). I had never heard of Slender Man until hearing about the tragic events that happened in Wisconsin. What I have learned since leads me to believe that Slender Man was created online and has grown into a myth that has taken on a life of it’s own. That’s it. That’s all I know. Apparently there are stories you can read about him but I have never bothered (judging from this movie, neither did anyone involved in it’s making). I don’t know what he is supposed to be, where he is supposed to come from, what he wants or why he wants it. I sort of figured that the people making the movie would fill me in on all of this as we went along. They did not.

That’s the thing that really makes this movie stand out from all of the other bad movies I have seen over the years. It’s pretty obvious that no one involved in making it cared. Someone decided that Slender Man was a hot property and they needed to get something into theaters before it cooled off. A “script” was slapped together (no time for a second draft), actors were cast (just grab anyone no matter their age) and production began (just shoot one take of everything).

Let’s delve into these points a little more. We’ll start with the screenplay by David Birke. This is possibly the biggest flaw in a deeply flawed film. It doesn’t explain anything about what is going on and that’s quite a feat considering the lines and lines of exposition. There is an entire scene in which every single line of dialogue is a piece of exposition and yet, a mere ten minutes later I had no idea what the hell was going on. Normally at this point I would recap the plot for you. I can’t. I literally have no idea what happened. I know that no one on-screen seemed to be doing anything that a rational person would be doing. For instance, I know that no parent would just let their teenage daughter wander around in the middle of the night while believing that one of the daughter’s friends had been kidnapped in broad daylight. I know that you can’t scream while being strangled. Despite admitting to my lack of knowledge of the Slender Man myth, I’m pretty sure I know that Slender Man doesn’t make video calls to his victims. Yet, here we are. All of that actually happened.

It’s hard for me to tell if any of these actors were any good. When you’re given such terrible material to start with, there isn’t much you can do with it. This does seem to fall into the long line of horror movies that is set in high school but none of the cast seem to be high school age. It’s better than some I have seen though, these guys look like college kids. Some movies will try to set a movie in a high school and cast people who look like they are in their 40’s. Hey! Maybe that’s it, maybe that’s the one good thing I found in this film. The cast might not be terrible and they almost look like the age they are supposed to be playing.

There’s not much else to say about Slender Man. Have you ever been watching a movie and found yourself getting angry? And then angrier and angrier? Like wanting to stand up, walk to the front of the theater and punch the screen? That’s how this one was for me. Nothing made sense and, worse than that, no one cared that it didn’t make sense. I can accept a film being bad for a million reasons, apathy for the story, the art and the audience is not one of them.