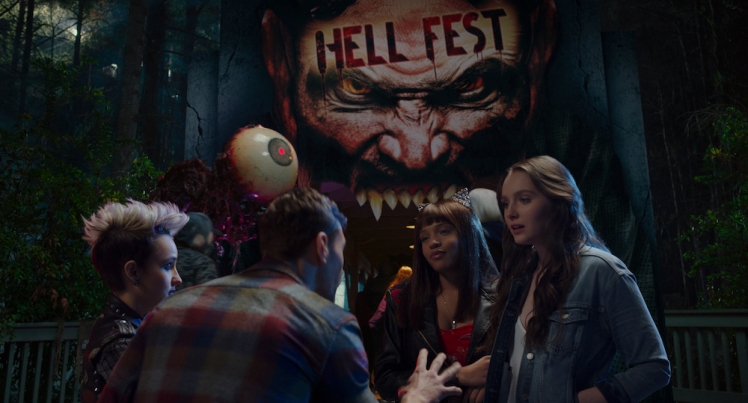 As we stand on the doorstep of October, I’m excited about the number of new horror movies we are going to be treated to in the next few weeks. I saw a trailer for Hell Fest a month or so ago and thought it looked like fun. I then forgot about the movie until earlier this week when I saw that it was being released. I found it curious that I hadn’t heard more talk about it but was looking forward to seeing the film. The slasher sub-genre is my favorite and it’s been awhile since we have had a slasher flick in theaters.

If you go into Hell Fest expecting to have a good time and not much else, you’ll mostly be satisfied. There isn’t any substance to this film. The basic premise is that a group of friends head to a haunted attraction for an evening of fun. There is a real murderer loose in the park. He is killing people and everyone thinks it’s all part of the show. It’s a solid setup for a slasher movie.

It has a number of problems, mostly beginning with the screenplay. The dialogue is absolutely terrible. Maybe there are people out there that talk like this but I don’t want anything to do with them. The characters as a whole are paper thin. I couldn’t tell you anything about who these people are other than the fact that most of them seem to enjoy going to haunts. There is no sense that they ever existed before walking on the screen. There is at least one attempt at giving a backstory to a couple of the characters but it never goes anywhere, it just sort of hangs in the air, like we’re given the setup to a joke but not the punchline.

These complaints are pretty standard for slasher movies. How many developed characters show up in the Friday the 13th franchise? And that’s my favorite of all the horror franchises. Where Hell Fest really fails the audience is the kills. There is no imagination in them. There is one kill that sort of stands out as interesting but the rest are generic at best and boring at worst.

I give director Gregory Plotkin credit for making the film look great. As you can probably imagine, a lot of the action takes place in very dark rooms and Plotkin does a wonderful job of putting that on screen. The party atmosphere of the amusement park really comes through as well. The scenes that take place outside of the mazes really do feel like being at an amusement park.

The only other thing that shines about this movie is the chemistry between Amy Forsyth and Roby Attal. They play Natalie and Gavin, two characters who are clearly attracted to each other but are just a little afraid to admit it. The scenes with the two of them flirting,  acknowledging their feelings and not acknowledging them at the same time, are great. Unfortunately, we don’t get nearly enough of them.

There were only three other people in the theater when I saw it. This probably impacted my experience with the film. In a packed theater this could be a lot of fun. Normally I would criticize a film for relying too much on jump scares (and Hell Fest has a ton of them) but they make sense in this context. The movie does take place at a haunted theme park. With a large audience, this could have been fun.

This is a basic paint by numbers slasher movie. There is new scenery but no new ideas. Take a group of friends and go in not expecting much and you’ll more than likely have fun with it. If you go in looking for the next great horror icon or slasher franchise, you’re going to be left extremely disappointed.