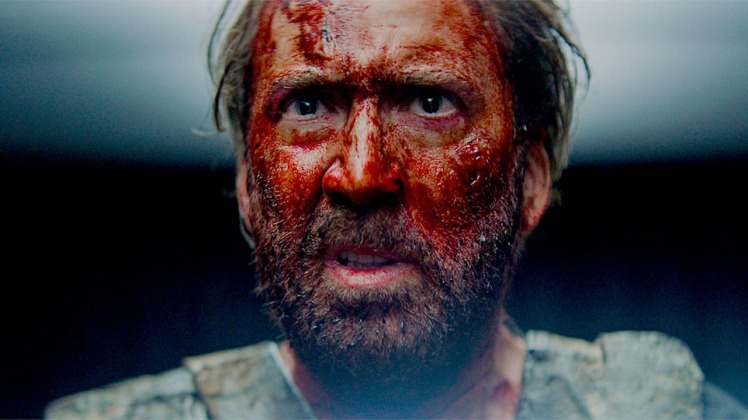 The easiest way to sum up Mandy is Nicolas Cage turned up to 11, battling bikers who have been whacked out of their mind on bad acid and a creepy cult. There’s animation and something called the Cheddar Goblin. Basically, it’s everything you have ever wanted, wrapped up in a nice 2 hour package.

This is the role that Cage was born to play. There is a lot of great stuff going on in this film but he’s the pinnacle. I have often felt that he plays characters a little too unhinged and takes me out of movies, that’s exactly what Mandy calls for and he gives it everything he’s got. To be sure, Linus Roache is great as the cult leader and Andrea Roseborough plays the titular character superbly but everything is riding on Cage’s performance and he’s at the top of his crazy ass game.

When I started Mandy I was expecting your average revenge flick. There is nothing I can say that could prepare you for the ride that director Panos Cosmatos will take you on. The story (which he co-wrote) is outrageous, the film looks absolutely gorgeous, the score is spot on and you’re constantly wondering what he is going to throw at you next. I often complain about the length of movies. It seems like no one is capable of making a sub-two hour film anymore. Mandy clocks in at 2:01 but it doesn’t feel like it. This thing flies by.

Mandy manages to be brutal, moving, violent, bloody and beautiful all at the same time. It’s not the kind of movie that is going to appeal to everyone. I can imagine that there are a number of people who will find things to complain about. The characters aren’t very fleshed out, for instance. The story isn’t all that believable. These things don’t matter if you are willing to shut your brain off and go along for the ride. If you’re not capable of doing that, you’re probably not going to have a good time with this one.

2018 has been a solid year for the horror genre. Of all of the horror movies I have seen this year, Mandy is without a doubt the most pleasant surprise. I don’t know if it will be at the top of my year-end list but it’s going to be awfully high.