Outside of any writing classes I took in my years as an educated young man, history has always held a special place in my heart. My dad passed on his love for our past to me through his enthusiasm and knowledge of those fascinating events of yesteryear. Trench 11 already had my interest because of its setting. You take any standard horror template (this one being a contagion) and place it in the context of a major historical event and I’ll eat it right up. Hell, I’ll most likely go back for seconds.

The First World War is coming to a close. As is often the case, there is one last mission that needs to be completed. British intelligence has recently learned of an underground bunker in what used to be a German occupied forest. The belief is that said base was a prime experimenting ground for a German scientist named Reiner and whatever manner of biological warfare he was cooking up. A British major bucking for a promotion and a timid doctor think it would be an excellent opportunity to discover just what the Krauts were up to. With a trio of American soldiers serving as guides and a shell shocked tunneler in tow, the small group plan on getting to the 100 ft bottom of the mysterious base.

The Allied group are not the only ones with a mission to accomplish. Reiner and a German general are there as well in hopes to coverup whatever awfulness those naughty Germans were getting into. The higher ups fear that no peace can be reached if the enemy discover Reiner’s horrific crimes against humanity. It would seem the destruction of the place is a guarantee…or at least it would be if Reiner was actually willing to set fire to his progress. He’s already sabotaged the first attempt to eradicate the evidence upon their retreat and now that he’s back he has other plans in store for his years of hard (and evil) work.

The Allied forces arrive before the Germans and begin to explore. They’re immediately put off to the idea when they find a pile of dead soldiers who were executed (along with a dog) at the entrance of the bunker. Their trepidation grows when they find the base sealed by a metal door and a German survivor warns them not to open it. When he realizes they are not going to take his advice he forces one of the Americans to blow his brains out. At this moment I would have turned tail and gotten as far away as possible and most of the men are down for that idea but the British major insists they press on. It’s his mission, so they are forced to obey.

The adventures in the cavernous base go about as well as you would expect and Reiner’s experiments begin to show their ugly faces. He has created some sort of parasitic worm which inhabits its host and eventually takes over the frontal lobe. The majority of the infected become murder happy psychopaths. The infection begins to spread and Reiner’s crew manage to apprehend the surviving heroes. Soon the tunneler and the German general (who has grown quite weary of Reiner) decide they need to blow up the cave and eliminate the horrors contained within.

The strength of Trench 11 lies in the setting. The underground labyrinth is claustrophobic and dark and offers some genuine chills. You can taste the tension and join in on our heroes nervousness at what lies just out of sight in the shadows. The effects are practical and their is a excellent cringeworthy autopsy that had me squirming a bit. The cast is solid (I always love seeing Adam Hurtig) and some of the melodramatics (of course there’s melodrama, the Germans are making speeches) are welcome tension breakers. Doesn’t really offer anything new but it’s welcome all the same. 7/10 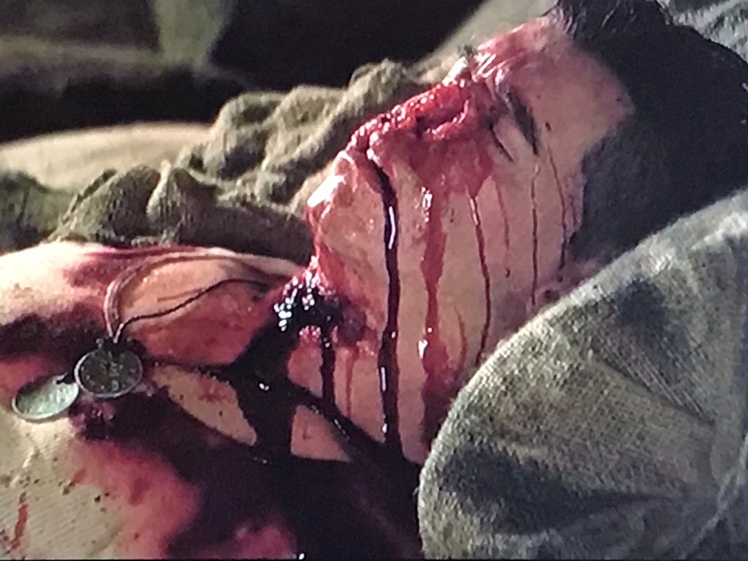