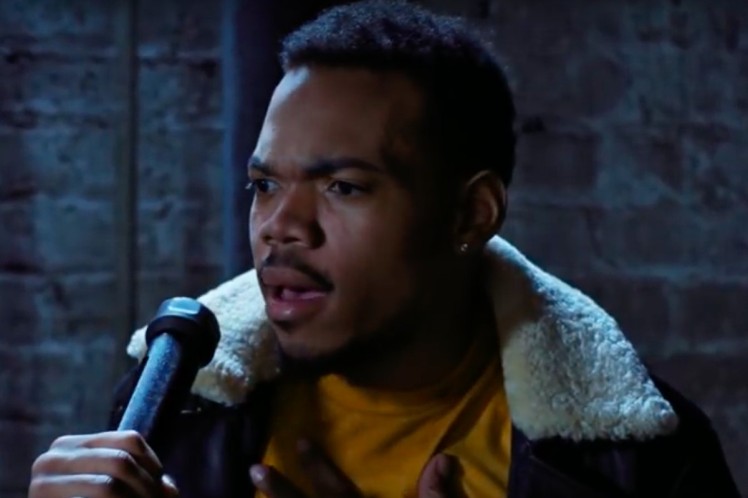 Slice is equal parts horror movie that isn’t scary, comedy that isn’t funny and mystery that isn’t mysterious. There are a lot of horror elements in the movie. We get ghosts, werewolves, murder and Chance The Rapper acting. None of it is scary though (with the exception of Chance’s acting). There are a ton of jokes but they’re mostly just corny. They do indeed setup a mystery but if you’ve ever seen a movie before you’ll figure it out almost immediately.

The basic idea of the story is a good one. In the world of Slice, humans and supernatural beings coexist. The mayor of Kingfisher has forced the town’s ghost residents into their own town, known as Ghost Town. When human pizza delivery drivers start having their throats slit when making runs to Ghost Town, the police suspect a werewolf who has just returned to town. He was their main suspect in a series of murders that occurred years before. The question is who is committing these crimes? It’s a decent setup for a horror-comedy-mystery film. The execution leaves a lot to be desired however.

The ghosts are played almost exclusively for laughs in Slice, there is nothing scary about any of them. The werewolf character is our hero, so while he comes across as the coolest guy in the room, he isn’t scary either. The most horrific element to the film is the murders. These are done quickly and with a minimal amount of gore, hardly enough to satisfy the average horror fan.

Most of the comedy in the movie just doesn’t work. The werewolf hero of the film is named  Dax Lycander, I can only assume that this is supposed to be clever. It’s not. It’s about as clever as naming him Wolfy McHairyface. That’s the level of humor you can expect to takeaway from Slice.

The real question on everyone’s mind when it comes to Slice though is: Can Chance The Rapper act? The answer is: Maybe (I know I took a shot at him earlier but that was just too easy to pass up). There are scenes in this film where he is good and then a couple of scenes later he is horrible. I’m not sure if it has something to do with the way these scenes are written or if it is the people opposite him. Either way, I feel like the jury is still out on him as an actor.

The few laughs that you will get from this movie come courtesy of Paul Scheer, who plays Jack the owner of the pizza place. He has a couple of laugh out loud moments and is head and shoulders the best actor on screen. This didn’t surprise me, Scheer is a talented comedic actor and he seemed like he was right in his comfort zone.

I was really looking forward to watching Slice. A24 has been flawless for awhile now and I was hoping for a good horror-comedy from them. I guess they can’t all be winners. It’s not a total loss though, I am a bit intrigued to see what writer-director Austin Vesely does next. I wouldn’t recommend this film but there is something about it that makes me think that he will give us something good soon. Skip Slice and wait on that one.