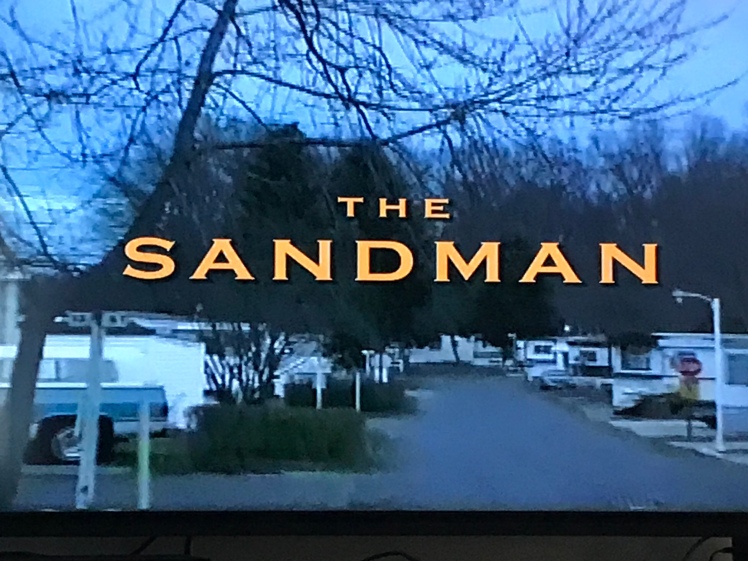 J.R. Bookwalter (he of Dead Next Door fame) is up to his old cheapo tricks in this slightly off but somewhat sleep inducing supernatural thriller.

Folks are dying in their sleep and an ancient evil force is to blame. He’s a large, shadowy, cloaked, glowing eyed goober wielding a sickle and sometimes has a living penis like appendage that feeds off the dreams and (maybe) blood of people. They may have made it clear but sometimes the mind wanders when not much is going down.

A romance novelist ,who resides in a trailer park (yes. You read that correctly), begins to suspect some weirdness is going down after his wacky neighbors end up dying and he sees something big fleeing into the darkness. He enlists the help of his sleazy photographer friend and a Vietnam vet who was one of the few survivors of a Sandman encounter back in ‘Nam. The race is on to stop the creature before it gets it weird penis thing on Gary’s (our long haired romance writing dip) crabby girlfriend.

There’s some fun characters (cousin Ozzy played by screenwriter Matt Walsh is my personal favorite), bad acting (which I completely support) and I dig the trailer park setting. The budgetary limitations are worked around and I’ve never had any problem with cheap flicks but there are some stretches that are the cinematic equivalent of watching paint dry. It’s not a wasted effort by any means but it definitely depends on your stomach for cheapjack horror. 6/10