A LIGHT SO DIM 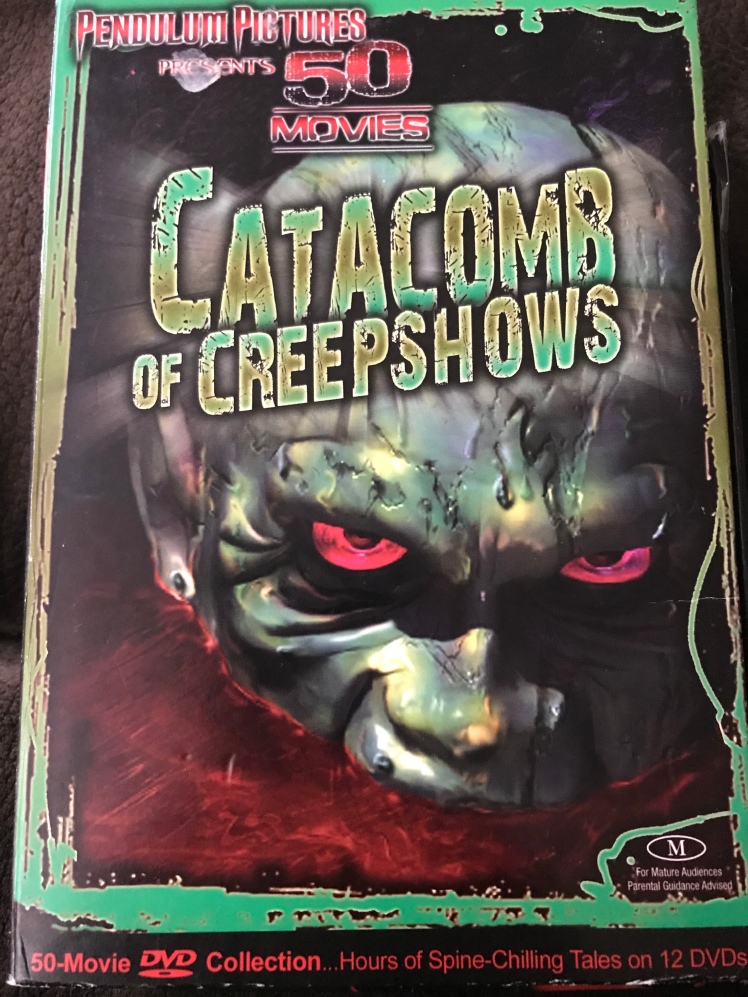 The smell of burnt hair and ozone wakes me up. The pounding in my head has me squinting to regain some kind of solid thought. I am bruised, I am bloody but I have survived. It’s been seventeen years since I watched the first disc of Catacomb of Creepshows and I remember very little from the time before. I begin to cough…a death rattle? No. A torrent of blood expunges itself from my body and the one two punch of Mill Creek and Pendulum Pictures releases it’s hypnotic hold. Dear lords, it hasn’t been seventeen years, it’s only been a handful of days. What madness is this? Wiping the crimson poison from my mouth, I march on…. 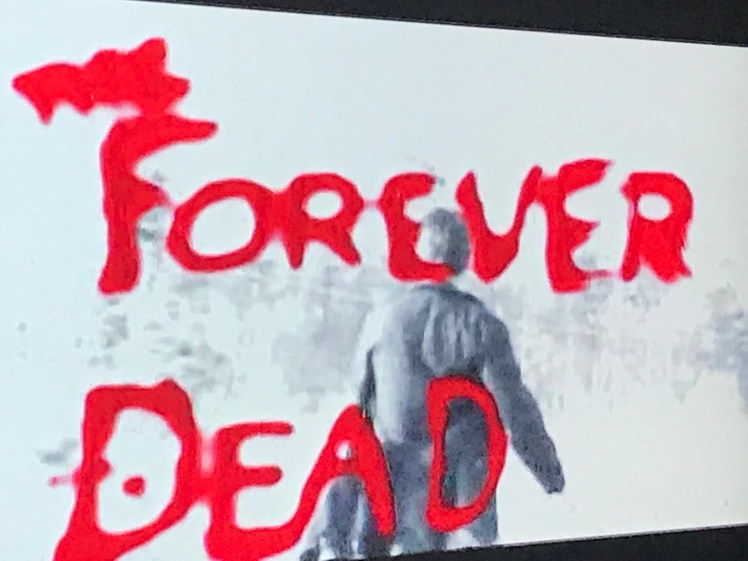 The Forever Dead (2007) (USA) Christine Parker’s backyard splatter epic has no right running more than one hundred minutes but somehow manages to charm the hell out of the trash loving horror fan in me.

The opening credits less than inspire as they play out over the climax of the film but in reverse. Luckily once it all gets going, it becomes a pretty enjoyable time…if you’re accustomed to hometown shenanigans from a cast comprised of friends, family and drunk locals. A scientist has a mental breakdown and releases an infected rabbit called Bugs into the wilds of North Carolina. The rabid rabbit is carrying one nasty virus and begins spreading it as it attacks some random folks, turning them into zombies. Various characters pop in and out, along with some bodycount filling extras and eventually we’re left with a ragtag group of blood covered survivors holding up in an abandoned house. An extended flashback reveals the true villain (although it was pretty obvious from the get-go) and the opening reversed footage we’ve had more than an hour to forget plays out in linear time (although I’m pretty sure a few things were edited out).

I’ve said it a hundred times if I’ve said it once: “if you bring enthusiasm to your low budget vision, odds are I’m gonna like it.” There’s more than thirty minutes of this film that could have easily been cut out but I still found myself enjoying it more than regretting my time spent watching. Familiar crap acting, scenes dragging and audio that jumps from almost inaudible to ear piercingly loud are all present and accounted for. The music is better than most of the butt Metal you find in these crapfests and the script actually had a few belly laughs intentionally dragged out of me. I’m also smiling thanks to the butcher shop gore, zombie rabbit puppet action, JNCO pants and obvious (terrible) adlibbing. The first win on this box set. 6/10

I’m feeling invigorated. Knowing that there was one gem hiding in the fifty film collection has me cautiously anticipating other “winners”. I may get lucky or the low budget film gods may bang me up the caboose with the complete Todd Sheets video library… I’ll just have to roll the dice and see.

Storm of the Dead (2006) (USA) The President reinstates the Florida militia after Hurricane Xiora tears apart the Florida Panhandle. The militia has orders to shoot any looter on sight and when they track one through the swamp, they carry out those orders. It’s a hell of a mistake because he just so happens to be the grandson of a powerful voodoo queen. She quickly dispatches the trio of killers with her voodoo skills.

When his men don’t report back, the head of the militia sends out a small group of his soldiers to see what the hell happened. The small platoon heads into the swamps with a reporter and get more than they bargained for when they capture a chesty young woman who is actually the voodoo queen in disguise. One by one the militia members are picked off. There’s a whole bunch of walking, followed by breaks from walking filled with talking and then even more walking. Off screen homicides are the name of the game and a zombie shows up and does nothing with nine minutes left.

Personal favorite Debra Cassano (Scalped!) plays one of the soldiers and every female cast member with any screen time gets naked. There’s a little SOV charm but not much else. Oh and look out for the exciting conversations about militia protocol and philosophical debating about shooting looters. It’s the cinematic equivalent to a long hike with friends who, by the end, you realize you just don’t like anymore. 4/10

I still feel like I have feet reassuringly planted on terra firma. At this point on the first disc I was ready to shove a fork in my eye. The good graces of The Forever Dead despite its ungodly runtime has kept a soft light burning in my heart. Storm of the Dead didn’t break me and at least there were bewbs! 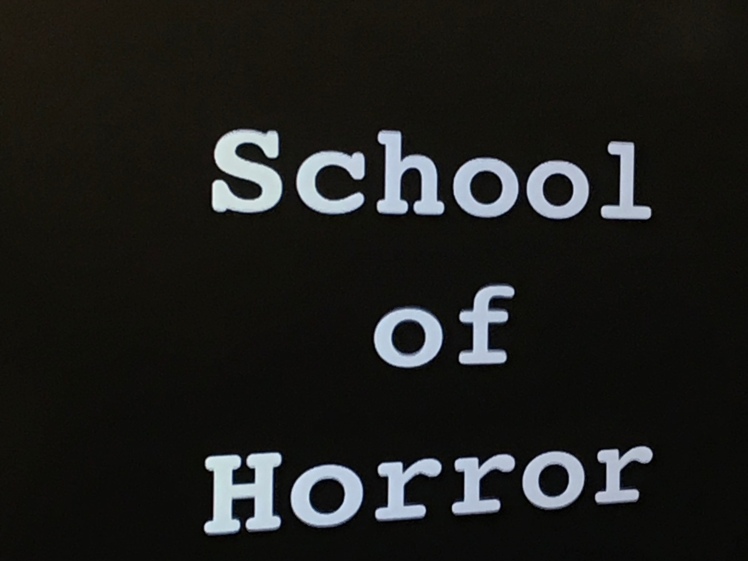 School of Horror (2007) (USA) A wannabe filmmaker who resembles a budget store James Franco and acts like James Franco’s character from Spider-Man 3 after he got the head injury, pretty much snaps after his teacher criticizes his film with the complaint that it’s all been done before. Wannabe actor, Jack Terri, joins Rocky Horror’s (fake ass Franco) crew after a guerrilla filmmaking audition and accompanies Rocky’s entourage to a party somewhere out of town. They stop at a local dive along the way and learn of some local folklore. Apparently, every seven years a cannibalistic Native American spirit comes out of the woods and slaughters anybody foolish enough to journey outside. Faster than you can say “Wait. I have a fast forward button.” Rocky’s crew (and some boozed up locals) are being sacrificed for the sake of catching “REAL HORROR” on camera.

Massachusetts shot sleep inducer is some slow going crap with an ending you can see coming like a Tyrannosaurus Rex in a side mirror. It’s heart is in the right place and Dory’s Tavern (obviously a real hole in the wall, if not under that name) is a charming filming location…if you have a soft spot for dive bars like I do. Outside of that and BEWBS! there ain’t much else going on. School may have the most slapable lead actor I’ve ever seen. 3/10

A dud may have slightly tripped me up but it was a well meaning dud so it’s all sunshine and rainbow farts on my end. I may even whistle…. although that may piss off whatever film gods are smiling down on me this day. I’ll keep quiet… and march on.

A holy order within the Catholic Church called The Order (or The Brotherhood. It just really depends on where the scriptwriter drank himself into amnesia and forgot what the hell he was doing.) takes a physical stance to fighting evil. When the renegade Father William goes missing whilst out on a hunt the higher ups in The Order or The Brotherhood or whatever decide it’s in their best interest to send the completely inexperienced Brother Claude out into the evil world the find the missing warrior in God’s army. This leads to….NARRATION!!!! If you’ve ever sat back and watched a film wondering why a character is doing anything (including but not limited to just walking around the streets) then buddy boy this is the flick for you. The first twenty or so minutes of this holy turd are narrated beyond the point of saintly patience and then that narration comes back around and beats that saintly patience to death and then narrated as it pisses on the beaten corpse of said patience.

Claude somehow manages to find the missing priest and teams up with the insufferable cranky eyepatch rocking racist to help a family of low level babes deal with their Satan possessed brother….or are the ladies the evil ones?!? You won’t care. I sure as fuck didn’t. Fake blood falls on fake boobs and when the possibly possessed Christopher shows up you’ll wonder how Tommy Wiseau damaged his brain and started being worse at what he does. I don’t know where ya stand on the whole pro-life/pro-choice line but I don’t think there’s any argument that this cinematic baby should have been terminated soon after conception. 1/10

Holy fuck, disc 2 must have been holding a giant dump in the whole time just to drop it on me right when I got to the end. Starting it off with an actual good flick killed me into a false sense of security and I was actually able to look on the bright side of the slowly diminishing returns but Satan’s Whip is like watching a one man drama performed by Howie Mandel. It’s a void. An endless entertainment consuming nothing. Still, the second disc had very little of disc one’s forced nihilism and for that I am thankful. But fear not faithful readers, I’m a bit of a masochist and I’ll keep taking the filmic beatings being delivered…I forgot the safe word many years ago.

That ends the second disc and at least I got to see Debra Cassano. There’s hope and where there is hope there is the will to go on…