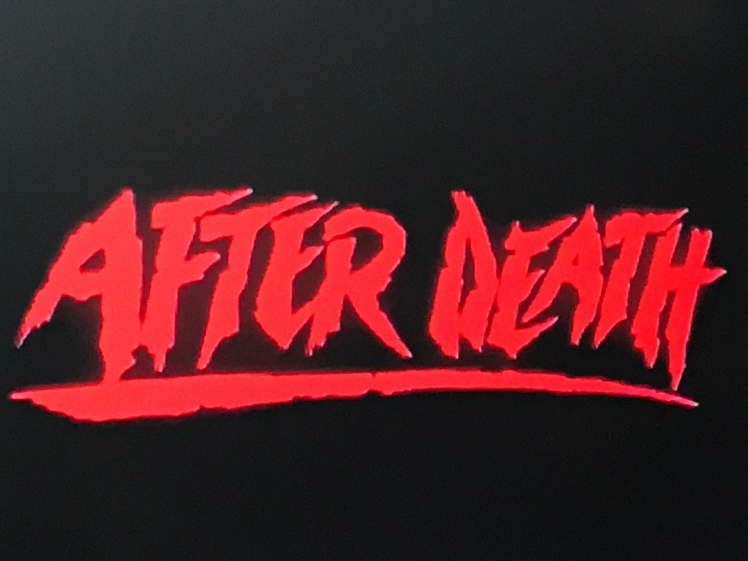 There’s a moment about halfway through After Death (although time becomes indecipherable while watching, so for all I know it could be ten minutes into the film or six seconds prior to the conclusion) where you’ll have to make a decision. You’re in or you’re out. There’s no middle ground, no neutrality. A coin and its two sides. On one side is hate, which will lead to the complete desertion of the film. There’s nothing here for you, and that’s fine. Two choices to be made but there is no right and wrong answer. You’ll forget about After Death in a couple hours, going on your merry way and never concerning yourself with this late eighties Italian trash ever again. On the other side of the coin is love. If you land here, one bit of dialogue will lead to the singing of a heavenly chorus, promising you such sights to behold.

I was fifteen when a bootleg copy of After Death made its way into my life. Fifteen when I made a choice that changed the path I’d be rambling down for the rest of my mortal existence and hopefully well past the point of shuffling off this mortal coil. The film has already been a bit on the wild side leading up to the life altering dialogue. Witch doctors, an acrobatic demon, heavily armed scientists and soldiers of fortune will have had you grinning like a fool or audibly rolling your eyes by the point that three explorers find the mythical Book of the Dead (conveniently written in English on the cover). As a horror fan, I was already familiar with just how dangerous ancient tomes could be. I knew that it was a shitty idea to read from this book. Of course, it would be one boring ass time if everyone else was privy to this information. Ignoring the warning within the book, the head dumbass decides to read aloud and here are the dreaded words in their entirety: “If you want to open the doors to hell today. These four words you must say.” This is the turning point. The coin flips and you have to call which side it will land on. These two sentences tore down the walls in a home I had built on a secure belief that I knew what good filmmaking was. I was raised on monsters, I knew Godzilla’s kaiju brawls were a goofy good time, I loved the Gillman but would hardly discuss him with my Cinema loving friends, we were into “true art”. Foreign films shot in black and white which tackled philosophical questions as they unwound in eye catching splendor. I was planning on film school, becoming a “true artist” with a name praised like Fellini, Kurosawa, Scorsese and Welles. Junk films were junk films, I had seen a couple and outside of a few laughs they hadn’t really offered much.* Sure John Waters was a subversive genius but he had an exciting vision many lacked. And then After Death.. a truly fitting title because the film killed what I was. After those two sentences I emerged from the ashes of my former self, a phoenix now carrying a lust for garbage cinema.

I still watch critically recognized flicks, I still enjoy them but I dedicate most of my days to blissful trash. SOV nightmares, Turkish knock-offs, Italian cash grabs and Bollywood fever dreams occupy my time. It’s all thanks to After Death. If you want to open the door to Hell today. These four words you must say. “Put on After Death” works just as well as whatever garbage made it to the final cut.

*this may not be completely factual. My friend Travis will attest to how many… interesting films we used to watch in the basement of my parent’s house.

On a small and isolated island a collection of scientists attempt to master death by figuring out cures for the horrible diseases mankind fights on a daily basis. When they fail to cure a witch doctor’s daughter of her leukemia, the witch doctor gets pissed and decides to unleash Hell on those who are attempting to defy it. The gun toting scientists come across the pissed off holy man just as he’s completed his final task. He’s already unleashed a zombie epidemic on the island (hence why the heavily armed men of science are confronting him) but now he has transported demonic powers into his wife and she goes on a warpath.

One couple and their young daughter have decided to flee instead of pointing guns in the face of the occult master native but mom and dad don’t get far when they are overcome with zombies. The little girl manages to escape but ma and pa are eaten up. Years pass and group of vacationing mercenaries and their babes are passing by the now cursed island. In a case of extreme coincidence (but most likely extreme stupidity) one of the ladies on the speedboat is the young girl who escaped the island years ago. The boat loses power and magically steers itself to the island. Uh oh. Also on the island are three explorers trying to get to the bottom of what happened all those years ago. Dismissing the supernatural rumors as bullshit, the trio march on hoping to stumble across any bit of evidence they can find. They eventually make their way into a cave and find The Book of the Dead. Reading aloud, they unleash a horde of zombies which proceed to claim the lives of all but one (pornstar Jeff Stryker) of the three morons.

The surviving moron eventually comes across the surviving mercenaries who have been dealing with their own problems as well. Even before the cursed tome was read from, there were already some undead bastards hanging around the island. One of them managed to bite a lunkheaded soldier of fortune. This bite led to an infection, which eventually turned him into a zombie. So the problems from within the cabin the mercenaries have attempted to secure and problems from the undead gathering outside is leading to depleting numbers of gun happy idiots. The future doesn’t look any better because everyone seems to be hellbent on making the worse possible decision they can. Dead mercenaries give way to zombies with guns and zombies with guns lead to more dead mercenaries. The vicious cycle goes on until the two surviving members make their way back into the cave and attempt to end the horror for good. It doesn’t go well.

Somewhere beyond the usual stupidity, rushed Italian horror flicks wallow in, After Death remains nestled in psychotronic glory. Nothing in this film makes sense and it’s made all the better by the fact that nobody behind this film made it that way on purpose…they just didn’t give a shit. That’s fucking beautiful. 9/10 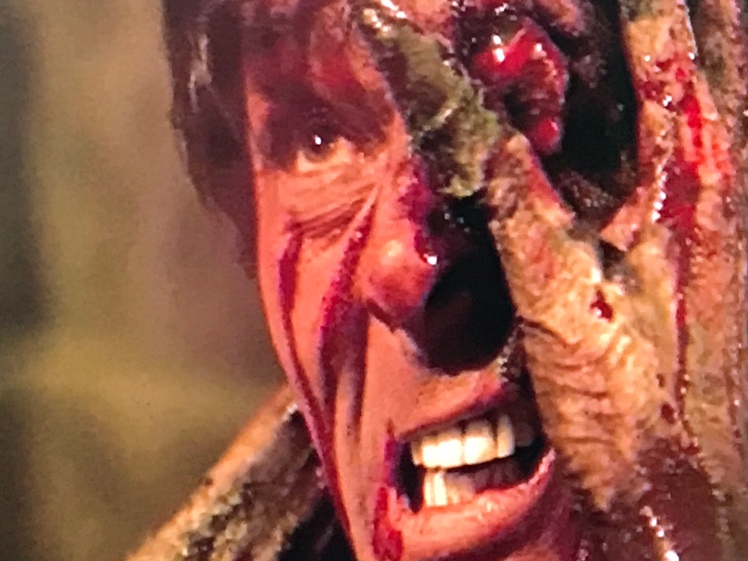