Spaghetti nightmares have always held a special place in my heart. Argento crafted some jaw droppingly beautiful carnage throughout his career, Bruno Mattei is one the greatest gifts ever bestowed upon trash films and Fulci remains one of my all time favorite filmmakers (yes, even his frowned upon later output is held in high regard in this household). I won’t go and name all the Italian terror crafters because the list is long but I will (for the sake of this piece) bring up the late great Mario Bava. More specifically Mario Bava’s 1960 classic, Black Sunday. Instead of going in depth on a true genre masterpiece, I will just say that Black Sunday is one of the most important horror films ever made and should be seen at least once by any fan of the genre. It’s the simple story of a resurrected witch and an ancient curse anchored by Bava’s amazing skill set and a career making performance from Barbara Steele. “But why are you going on about this Black Sunday flick?” You may ask. Well, first off, patience is a virtue and secondly, Mask of Satan is a semi-remake from Mario’s semi-talented son Lamberto. Now, Lamberto has some fine flicks to his name as well but as his film catalogue grew, it seems his enthusiasm may have dwindled. Which can be said for a lot of Italy’s horror flicks as the eighties came to a close. Italy is renowned for some bonafide classics but as the nineties neared it seems the country’s horror output collectively shit the bed. But that’s fine, many times I find a surprising amount of joy in a cinematic bed shitting and Mask of Satan definitely needs some new bedsheets.

A mountain ski trip amongst a group of “youngish” “friends” takes a turn when the mountainside mysteriously opens up and swallows all of them….well they kind of blindly jump in but since I have never partook in skiing I won’t assume how easy it would be to avoid a sudden fissure in one’s snowy path, even after watching a few friends hop on into it before you yourself take a slow motion leap down a newly formed abyss. Trapped inside the mountain, the group of idiots look around a bit and one of them stumbles upon a mask that kind of resembles Jason’s upgrade mask from Jason X but with nails on the inside of it. Of course, the mask is connected to the face of a frozen corpse but oddly enough no one really seems to give a shit.

A fierce wind kicks up and reveals what looks to be a temple located in the cavern. This wind also brings about the sudden impalement death of the idiot who took the mask but, again, no one really seems to give a shit. The surviving seven wander through the temple (if I am not mistaking it is the same fantastic crypt setting from Lamberto’s charmingly stupid Graveyard Disturbance) and eventually make their way out into a seemingly abandoned mountain village. It is soon uncovered that the small town is occupied by one lonely soul. A blind priest who reminded me a hell of a lot of Christopher Walken as Max Zorin in A View To A Kill. 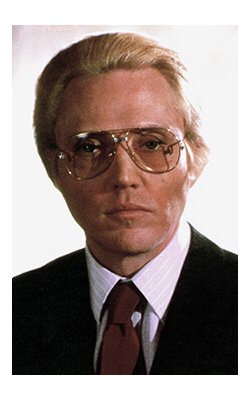 Instead of having Grace Jones by his side, the priest is guarded by a loyal white dog which does not seem to keen on the group of strangers. The man of the cloth offers them shelter anyways, assuring them that the path away from this place is snowed out and they’ll just have to wait till the sun does it’s magic and makes the journey possible. About just as quickly as the gang gets comfortable, something evil begins the rapid fire manipulation on the majority of goofs.

This evil has a name and that name is Anibas. Anibas was burned (well they tried to) at the stake in 1647 for witchcraft and congress with the Devil. A storm kicked up and killed the flames but the spiked mask they hammered into her face took care of her anyway. Anibas was the frozen corpse they found in the mysterious cavern and Anibas spelled backwards is Sabina. Why is that important? Well, Sabina is the name of the only female character Lamberto has attempted to flesh out. As everyone acts up and grows more mischievous with every minute, David (Sabina’s boyfriend) remains unaffected. He and the priest come to realize that a centuries old evil is back and it has set it’s creepy peepers on Sabina.

Horror history is filled with boneheaded character actions and a general lack of the basic human instincts that allow for some sense of survival. The group in this one should have probably been snuffed out of existence immediately after birth. These kids really have it coming. There’s a few familiar faces in the bunch (Mary Sellers from Stage Fright and The Church director Michele Soavi) but none of them really stick outside of “oh I know I’ve seen you somewhere!” Again, this is par the course for this era of Italian horror and, let’s face it, strong characters were never really The Boot’s strongpoint.

There are some quick flashes of nasty violence and the snowy landscape is suitably chilly. I’ll always appreciate a good crypt set piece, as well. The film does drag but the bursts of head scratching stupidity manage to sprinkle a bit of joy throughout the rough patches. It would be completely forgettable if it weren’t for the witch. Not in the way Madame Steele stole the show in Mario’s superior original but in the “oh my holy fuck! What?!” Kind of vibe. She spends most of the movie laying in her icy grave, screaming out psychically about her vengeance and having the possessed dorks do her bidding, but when she finally gets into business for herself it is a treat. It leads to a hilarious sex scene between Sabina and David which climaxes with a bizarre transformation (saggy old witch tits!) and a pitchfork stabbing and it also gives us Anabis’ final form. Which reminded me of Medusa from Clash of the Titans but with some neon paint and an extendable tongue.

Mask of Satan is not a good movie and if you compare it with its inspiration it is a god damn travesty. Luckily, we do not judge films on the normal merits over in this neck of the woods. There are no endearing characters (which is an oddity as far as me and stupid Italian flicks go) and the film drags for the majority of the runtime but there is enough insanity to keep ya going and the women are easy on the eyes (Eva Grimaldi being an underused asset with assets). If you like your horror stupid, ya should squeeze some joy out of Lamberto Bava’s idiotic homage. 6/10