1. To ramble without clear direction.

2. To speak in a manner that suggests the words are spewing out, as vomit.

Pardon me as I wax ramblemic. The seasonal treat candy corn, while pleasing to the eye, has always been a snack I could not get behind. Now, this may come off as controversial, but I just learned that if you create a mix of candy corn and peanuts, that both foods are improved one-thousand-fold. The salt of the peanut cuts the sweetness of the candy corn *and* dare I say, the ::creaminess:: of the candy corn softens the aggressive peanut. It’s the first revelation of the year that has further enhanced my autumnal experience. The second revelation enhancing my autumnal experience is SCARY MOVIE. 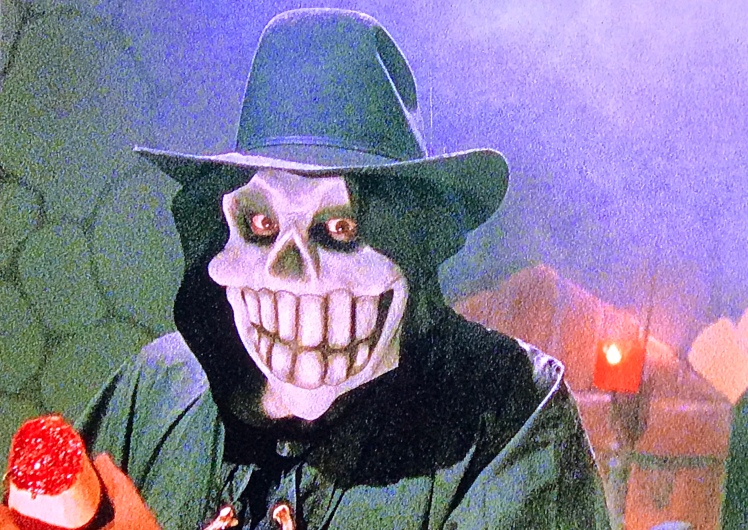 SCARY MOVIE, or, THE SPOOKY BALLAD OF UNLUCKY CHICKENSHIT (petition pending), is a movie I never realized I needed (or even existed for that matter). It all takes place at a haunted house attraction in a small town. It’s the hip place to be for the night and everyone is spending their evening there in festive getups as beach bums, cowboys, and vampires (pick your poison), ready for that adrenaline high that comes with being chased by a clown with a cleaver or a mummy with a machete or whathaveyou.

Our main man is Warren, AKA the most jumpy guy in Texas, probably. Warren didn’t dress up for the occasion. His eyes are perpetually wide as he tries to survive the horrors of standing in line, endures being bullied by his friends, and fails spectacularly at flirting with Barbara, a kleptomaniac “virgin goddess” my great-aunt Hattie would refer to as a doorknob, because everybody gets a turn.

All of this entertaining-as-hell nothingness that comprises the bulk of the movie happens against the backdrop of the local Sheriff campaigning for re-election and the local hunt for a psychopath, John Louis Barker, who just escaped while being transported to the Texas mental health ward.

Eventually, the gang of teens(?) makes it into the haunted house, where a mild amount of carnage ensues as Warren’s eyes threaten to pop right out of his head. The very nature of reality crumbles as he spills salt, breaks a mirror, and is crossed by a black cat.

He also falls into a snake pit.

A few reasons this movie needs to be viewed:

1. Characters on the periphery include a small gang of jerks, a black cat, and a giant laughing bearded man, who solely exists in the film to guffaw at Warren.

2. SCARY MOVIE was not touched by a single Wayans brother!

3. The absolute batshit dialogue. Highlights include—

“Talk about a chest fest!”

“You make me want to crap green onions.”

The latter is said by an old man, to a cow.

5. It’s like HAUNTEDWEEN, but better (on the off chance you’ve seen HAUNTEDWEEN).

All the piss and vinegar 19-year-old director Daniel Erickson had to offer was poured into this project and it shows. It’s a delight to look at, has a sense of humor, a slick style, and a nice soundtrack.  It’s execution feels very meticulous. The humor permeates every scene, often in the subtlest ways. You’d simply be a fool not to seek it out. It’s a crying shame Erickson never made another feature after this, but such can often be the case in the regional horror realm. I’m just glad it’s finally reaching a wider audience as this is its first time on disc.

The AGFA release contains an awesome commentary with Daniel Erickson and Joe Ziemba, as well as short films by Erickson, with MR. PUMPKIN being one of the better horror shorts I’ve ever seen.

SCARY MOVIE is definitely my pick of the season and will find itself to be a mainstay in my October rotation.