I used to be an avid churchgoer, back when I was “born-again.” The years of 2004-2011 consisted of me being holier than thou as I strutted around the youth group or the college group with earrings in my ears like the bad boy of the Evangelicals. It kept me out of trouble, but it made me an asshole. Eventually I came to the conclusion that anyone that would allow such unfairness, injustice, and suffering in the world, wasn’t worth worshipping even if they did exist. If the pastor had just had talons and murdered pimps for being evil, I may still be a practicing Evangelical to this day.

When his parents are blown up, the titular pastor grieves. In his grieving, Father Stewart tells him “So your parents died. That’s what parents do. They die,” followed with advice to go somewhere God would never follow him, so when he finds him, he’ll know he’s real or something. So he goes to China where of course he comes across a woman dying from an arrow blast to the chest. She drops a claw artifact that not only gives him the ability to go Jurassic Park on everyone’s ass, but also causes him to be pursued by ninjas. If only he could meet a hooker with a heart of gold. Oh, he does? Looks like we have our movie, folks!

On the surface, one gets the impression that THE VELOCIPASTOR looks like another SHARKNADO, dripping with CG blood and terrible acting. That’s not to say SHARKNADO doesn’t have its own entertainment value, but that found within the movie at hand is much more rich. Everyone and everything involved is perfectly competent, the blood is not computerized, and the humor is intentional and actually lands. I may return to church yet!

I know what you’re thinking. Where are all the Vietnam flashbacks and music video style montages? Oh ho-HO, ye of little faith! 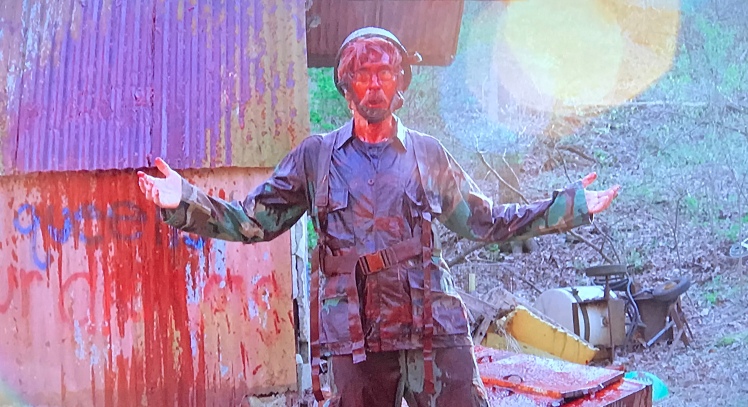 Now, I’m not sure how the film’s main character looks like the perfect hybrid of Benedict Cumberbatch and Zachary Quinto, or how he manages to make this character work, that’s just the way of THE VELOCIPASTOR! And with a title that good, the movie did not even need to be good to get plenty of views, but it does us one better by exceeding our expectations of what a low budget movie with a title like that could be. Crunchy guitars are thrown into the mix adding a texture that keeps the film from feeling too, erm, preachy.

Our raptor, who art in heaven…

If you only see one priest-turned-dinosaur that battles ninjas flick this year, make sure it’s THE VELOCIPASTOR. Amen.