A Playboy playmate, a Penthouse pet, a man named mom…
This isn’t a riddle, it’s Doom Asylum! Welcome!
I hope you enjoy your stay. While you’re here, make sure to enjoy the whole host of cartoon characters. From yuppie alimony attorneys, to hungover coroners, to all chick noisewave bands (they play the local sewers!), Doom Asylum kicks you in the crotch, spits in your mouth, and then tickles you and takes your laughing as affirmation of enjoyment. Never mind the steady stream of sadness pooling at your feet.
A car full of goobers drives to a field next to an abandoned asylum to…lay around? The girls are in bikinis so they must be going swimming! There’s no water to be seen? Well maybe they are just sunbathing! They’re lying in the shade? And they’re hanging out with a party dude and a baseball card freak? Well fuck, I don’t know! But a pre-Frankenhooker Patty Mullen is in a red bikini, heels, and a denim jacket, so a guy can’t complain! Too bad Tina and the Tots have beaten them to the asylum and they don’t feel like sharing their leisure locale.
There’s some random shouting back and forth between Tina and the goober gang, and every now and then, an (undead?) alimony attorney named Mitch kills one of them off with autopsy tools. It’s all very quaint.
I left my body 3 times during the course of Doom Asylum. The first was when Tina let her Tots out. This was supposedly done in order to get HBO interested in picking up the film. My eyes crossed, my pants tightened, and my spirit lifted out of my quivering meatbody before quickly collapsing back inside of it. 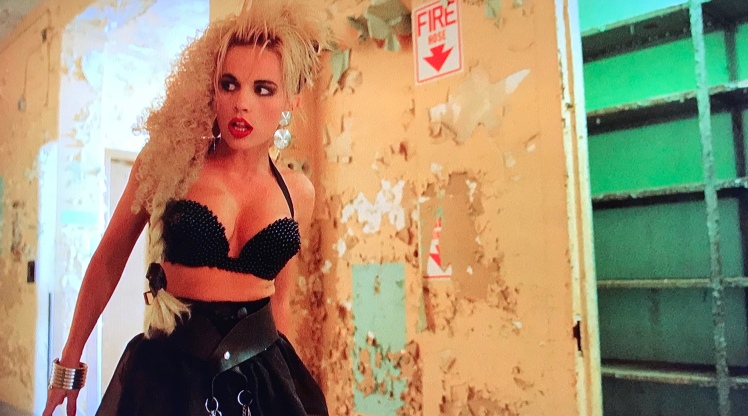 The second time happened when Mitch cut off a guy’s toes one-by-one. I cringed so hard that I dissolved into a thousand sugar sprites, rewrote the timeline of the cosmos, and took a thousand little sprite shits.
The final time I left my body while watching Doom Asylum was when Tina fell onto a conveyor belt and came out the other end as a meat cube. Somewhere, a demonic child called for a sacrifice to Sans-Elohim, beast of eternal blackness. I was chosen and slaughtered on the tabernacle of damned souls. In my guts they read things that they could never repeat, sewed me back up, and sent me back to my flesh prison.

A great new pastime of mine is popping in Doom Asylum and pausing at random intervals to read the graffiti all over the asylum walls. There are some doozies, such as:
“You fucken stink!”
“Acid is fun 🙂”
and my personal favorite
“NO MORE JELLO”
Doom Asylum checks all the slasher boxes while having surprisingly great photography and killer practical effects and gore, then throws in gobs of goofy sitcom humor and even a ridiculous love story. Truth be told, this flick is a comedy set to a slasher plot. The Soundtrack sounds like it’s right out of a SOV cheapie, and that isn’t necessarily a bad thing.
The Arrow Video release is an awesome thing to behold, and really whipped this movie from mind-numbing to merely head-scratching. I particularly enjoyed the Ruth Collins interview which shed some much needed light on this film’s production. Kudos once again to the folks over at Arrow for a great addition to any horror collection. You should honestly just buy it.
I rated this film after each of my three viewings and my rating went from 3/10, to 5/10, to my current rating—
6/10
Stay slime, and be rad at all times!
-Rat